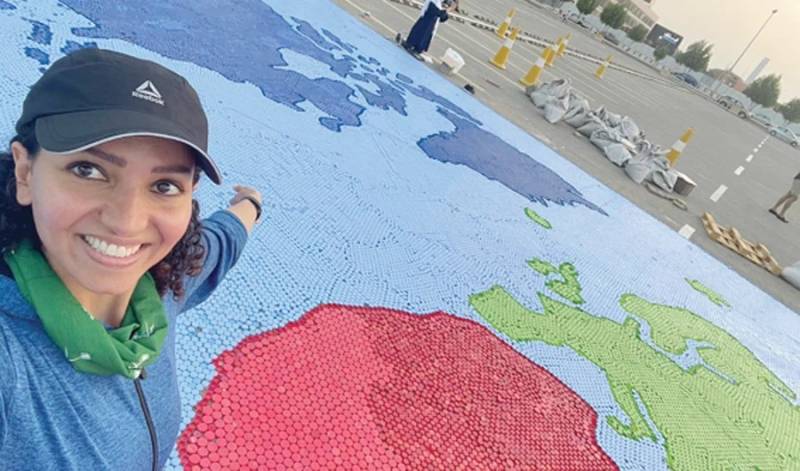 Al-Fadli told the media, “I feel beyond the moon. I really felt my work had paid off.”

“The image doesn’t matter as the size determines if I’m breaking a record and Guinness World Records had so many requirements to break a record or set a new record,” she said.

Meeting the requirements to break the record proved especially difficult due to turbulent weather conditions affecting her outdoor mosaic.

“I went through difficult days of the wind blowing all my water caps away, which delayed the project for a week. But with determination, consistency and with the help of my volunteers and most of all my family and husband, I continued my work and never gave up,” she said.

The project was aimed at shedding light on three events; World Environment Day — collecting plastic and recycling — World Oceans Day — not throwing plastics into oceans or the sea because of its negative effects on the environment — and United Nations Public Service Day — the importance of community volunteering. Al-Fadli said all three world days met Saudi Arabia’s Vision 2030 and its sustainable goals.

She said that her target volunteers were children, “since they are the future generation.” Al-Fadli was first inspired by student responses after she introduced the topic of global warming and recycling to children at the school.

Al-Fadli said that one pupil had asked: “’Does that mean our earth will die?’ She continued: “He questioned angrily, almost saying how dare people do this to our only planet.”

She told him that people could start change with themselves and a simple step to save the earth was to “collect plastics and make a humane project out of it.”

With the help of her students, family and friends, and the growing number of plastic bottle cap donors, “within 40 days of work, the news kept spreading and people from all over Jeddah, Makkah, Madinah and Taif came to donate.”

She said that donors were eager to see the outcome, with even the youngest of volunteers excited to see the end result. “They were amazed by how lovely and huge the map is, they promised to save plastics and reuse them or donate it to me for the sake of the Earth.”

Al-Fadli said that creating art out of recyclables was a fulfilling experience — and that she had always had an affinity for maps while growing up.

“Since I was a child, I used to love drawing maps. I don’t know why but it feels like I’m flying. Seeing a huge map was like a dream,” she said.