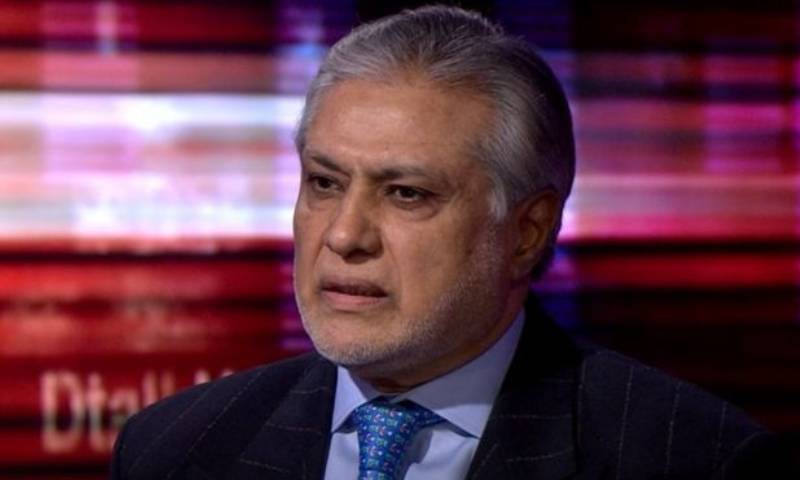 ISLAMABAD – The Pakistan Electronic Media Regulatory Authority (Pemra) on Thursday said that show-cause notices have been issued to private channels for rebroadcasting an interview of former finance minister Ishaq Dar to an international media outlet.

Dar, who is fugitive in asset beyond means cases, appeared on BBC News' show "HARDtalk" where he spoke about multiple issues including the accountability drive, 2018 elections, and allegations against former prime minister Nawaz Sharif.

Pakistan’s former finance minister Ishaq Dar said in the interview he owns only one property in Pakistan and that too, has been taken over by the government.

"I have my main residence in Pakistan which has been taken over by this regime," the 70-year-old aide of ex-PM Nawaz Sharif told BBC anchor Stephen Sackur.

Hitting out at the incumbent PTI-led government. "I haven't gotten too many properties. My net worth is what has been (inaudible)".

He added that he “believes in transparency” and has "declared all his assets in his statements".

When asked by the interviewer that Pakistan's accountability watchdog (NAB) had examined his accounts and found them not in order, Dar said that was not the case. "A joint investigation team was set-up and it had two military officers among others, they were actually overseeing the entire affair."

"NAB lost its significance some time ago. It’s an institution that is used for political revenge against opponents”, he maintained.

Pakistan’s anti-corruption body alleges former finance minister Ishaq Dar has assets "beyond his known sources of income"@stephensackur asks Ishaq Dar just what does he own? And will he return to Pakistan to answer these allegations? pic.twitter.com/jzEpJ9JriN

When Sackur insisted that news reports state that he and his family members own properties in Dubai and London, the former minister claimed the accusations were not true and he only has "one property" and added that his children are independent businessmen, hence their properties or assets have nothing to do with him.

Talking about his party chief, Dar said both the cases against Nawaz failed to prove any corruption.

Dar said the PML-N supremo is “struggling for democracy and supremacy of the Parliament in Pakistan” and the current government is a form of “judicial martial law”.

The now absconding former minister said he does not accuse the army, as an institution, of undermining the democratic process in Pakistan but stated that "it is the will and plan of some people, the same people who enforce martial law in Pakistan".

Dar was declared an absconder in late 2017. He has been escaping court proceedings since 2017 following the registration of reference against him. Later, NAB confiscated his various bank accounts worth Rs500 million and his house, spread over four kanals and seven marlas in Gulberg, Lahore.