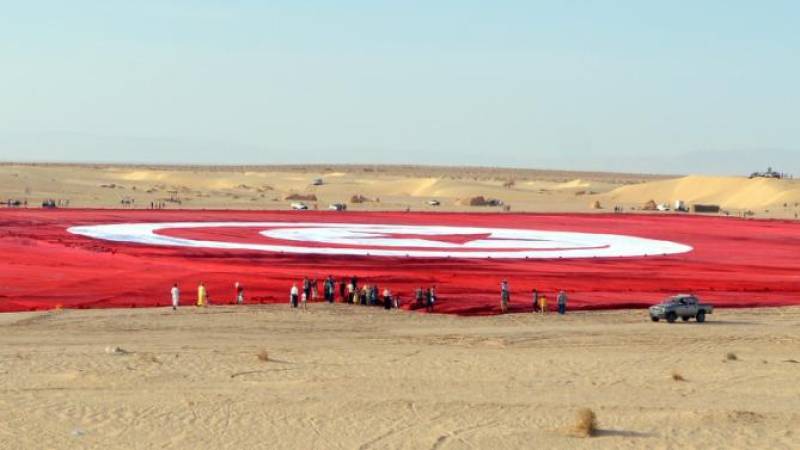 ONG JMEL (Web Desk) - Tunisians have unfurled a national flag the size of 19 football pitches in a bid to set a Guinness world record and promote patriotism in the face of Islamist extremism.

Hundreds of people turned out for the event at Ong Jmel in the southern desert yesterday, an AFP correspondent reported.

An honour guard of troops saluted the red and white banner as it was unfurled on the sand to the strains of the national anthem.

Spokeswoman Raya Ben Guiza said the project was the brainchild of a local textile manufacturer who had been shocked by a 2012 incident at Manouba arts faculty outside Tunis in which a hardline student tore down the national emblem and replaced it with a black Islamist flag.

When fellow student Khaoula Rachidi attempted to put the national flag back up, he assaulted her and she narrowly escaped serious injury. She became a national hero for her actions and was later decorated by the president.

The event's sponsor wanted to "show that the symbol of symbols is inviolable," Ben Guiza said.

She said she expected the adjudication of Guinness World Records in the next few days.

Ong Jmel was made famous by its use in the blockbuster movie series Star Wars as the set for Mos Espa — hometown of protagonist Anakin Skywalker who later becomes Darth Vader.