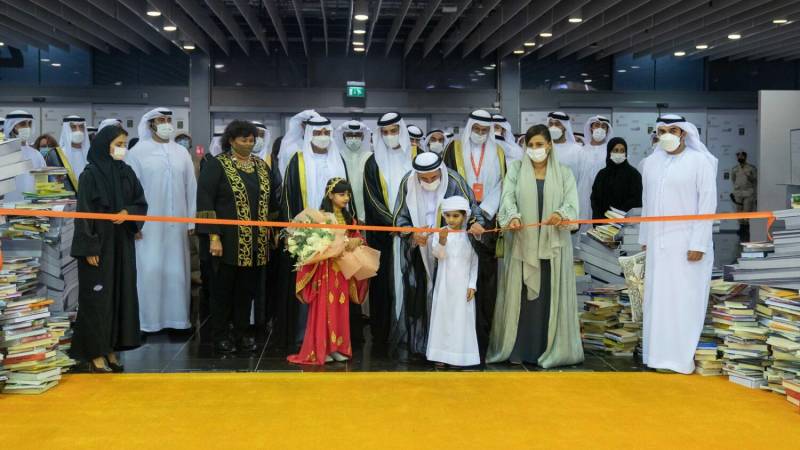 Themed ‘There’s always a right book', the 11-day event sees the participation of 1,632 Arab and foreign publishing houses. The event will host 85 books, bringing together a stellar gathering of Arab authors, intellectuals, poets and artists, from around the world.

The 2021 edition which was organised by Sharjah Book Authority (SBA) at the city's Expo Centre will run from November 3 to13. The fair celebrates Spain as a Guest of Honour.

The Ruler of Sharjah honoured Kuwaiti novelist and short story writer, Taleb Al Refai, as SIBF's 'Cultural Personality of the Year'. The winner of the Sharjah Translation Award ‘Turjuman’, and winners in various categories of SIBF Awards and the Etisalat Award for Arabic Children's Literature were also honoured at the event.

In a keynote address, HE Ahmed bin Rakkad Al Ameri, Chairman of SBA, praised the vision of the Ruler of Sharjah whose firm belief in the outcomes of the emirate’s cultural project has reinforced Sharjah’s stature as the cultural capital of the Arab world.

Al Ameri said: “His Highness believed in and envisioned the true impact of a culture long before other nations recognised its soft but tangible power. Sharjah’s cultural project is rooted in the Arabic identity and has been instrumental in forging connections and building bridges with cultures around the world, year after year.”

The SBA Chairman added: "I remember the time when His Highness said that a nation's cultural projects are long-term and that their outcomes cannot be realised in a year or two. I remember His Highness's words clearly when he emphasised that the cultural project is not merely a celebration of authors and books but rather a long journey that will one day benefit those who truly believe in it."

The Chairman continued: "Today, after 40 years, Sharjah and the Arab people have the right to be proud of the golden dagger you pledged for a book as a young child, Your Highness, as it is we who reap the fruits of your enduring commitment to books and reading. SIBF has emerged as the world’s top book fair this year, as it witnessed the highest number of deals struck in the buying and selling publishing rights.”

Al Ameri added: "Today, the strengths and beauty of Arab literature has crossed geographical and linguistic boundaries thanks to the prestigious Sharjah Translation Award 'Turjuman' introduced in 2011, which aims to promote Arabic titles globally. The creative works of our poets, intellectuals and authors now enjoy an international readership and till date, the award has received 16,490 translation requests from and into the Arabic language and has helped get1,493 books published."

Taleb Al Refai: ‘Being recognised as SIBF's Cultural Personality of the Year is a great honour and responsibility.

Taleb Al Refai, Kuwaiti novelist and short story writer, lauded the cultural project led by the Ruler of Sharjah that has enhanced the emirate’s status as an incubator of knowledge, intellect, and creativity. Sharjah is meant to be adorned by an intellectual and passionate love of books, culture, theatre, education and more, he said, adding that the emirate deserves to be the capital of the book and knowledge because the Sharjah Ruler’s passionate love for these pillars of civilisation has taken the emirate to this level.

He added that being recognised as SIBF's Cultural Personality of the Year is a great honour and responsibility and marks the culmination of a long career that commenced at a young age when someone whispered to him: "Perhaps you can be a writer one day".

In his keynote speech, Patrici Tixis, Chair of the Spanish Federation of Publishers Guild (FGEE), thanked Sharjah for the invitation to Spain to showcase the nation’s culture and literature, saying, “Between Sharjah and Spain – our roots are very deep and very close to each other. We still need to open new windows of exchange to continue building on this relationship. An event like SIBF facilitates this in the most vibrant and diverse ways.

“The UAE has a wealth of experience that will be shared with Spain, it is also a gateway to the Asian continent. The Spanish Ministry of Culture has a great interest in expanding to new international markets for translation, children literature, and publishing copyrights. SIBF provides great opportunities to advance the publishing sector, and strengthen cultural partnerships between the UAE and Spain, and turn the spotlight on Spanish authors and publishers," he added.

“Culture is the only way to build a solid bridge between cultures, especially between those that have deep and vast histories like ours. I, therefore, thank Sharjah once again for this wonderful invitation to their book fair,” he concluded.

Books in the Spanish pavilion will be donated to a new library with Spanish funding when the 40th edition of SIBF draws to a close, he revealed.

After the opening ceremony, His Highness toured the various pavilions at Expo Centre and made a brief stop at the pavilion of Spain, the SIBF 2021 Guest of Honour.

The 40th edition of SIBF brings together Nobel and Booker laureates, screenwriters of a hit Netflix series, renowned authors, illustrators and creatives from around the world. The cultural extravaganza will be home to 15 million books by 1,632 publishers from 83 countries, representing 1.3 million unique titles, including 110,000, which will be making their SIBF debut.

SIBF 2021 agenda includes more than 1,000 activities, including 440 cultural sessions led by 85 authors, in addition to 355 shows, performances, seminars and workshops for children led by experts from nine countries.

SIBF 2021 will stage 80 awe-inspiring theatrical and dance performances as well as musicals in which artists and performing groups from nine countries will participate. Meanwhile, 11 chefs and experts from 10 countries will lead more than 30 activities at the SIBF Cookery Corner.

SIBF's Social Media Station will host more than 12 specialised workshops on social media trends, creative content, and other topics during the fair.