Aamir Liaquat, Adnan Sami get into Twitter spat over Abhinandan 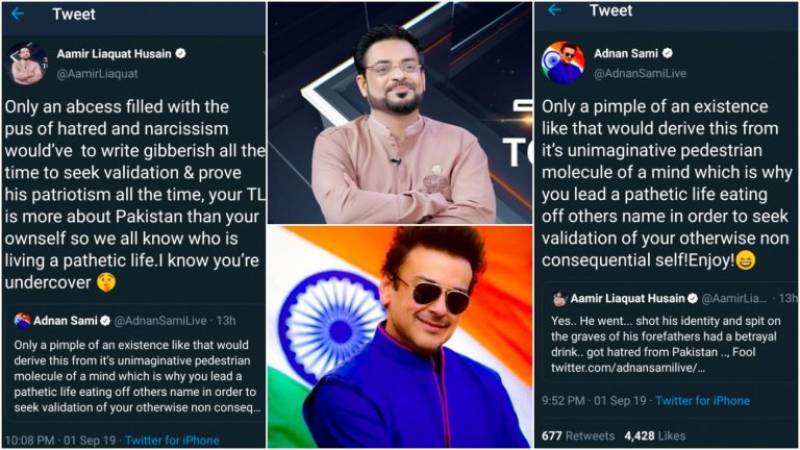 Twitter feuds between Indians and Pakistanis on political issues is nothing new. But Aamir Liaquat’s Twitter spats have a whole audience. Aamir Liaquat and Adnan Sami’s recent Twitter duel had people rooting for ‘Aamir Bhai‘.

Aamir Liaquat has been known to be bold in word choices and igniting the fire during any conversation, but this time it was Adnan Sami who first started this feud.

It all started when a Pakistani man tweeted for people to ask Abhinandan how was the tea.

Responding to a Twitter user, Adnan Sami mentioned the tale of the Indian Wing Commander’s ‘heroics.’ Basically that whole part about him shooting down a phantom F-16 aircraft with a MiG-21. Whereas we all are well aware of the actual event.

To which, Aamir Liaquat gave a reality check to Sami in a  befitting response:

Yes.. He went... shot his identity and spit on the graves of his forefathers had a betrayal drink.. got hatred from Pakistan .., Fool https://t.co/zOe6MTH4Rb

Things didn't end here, Adnan Sami then tried to use big words and try to intimidate Aamir Liaquat. Once the youngest parliamentarian in Pakistan, Amir Liaquat cut through it.

Only a pimple of an existence like that would derive this from it’s unimaginative pedestrian molecule of a mind which is why you lead a pathetic life eating off others name in order to seek validation of your otherwise non consequential self!Enjoy!😄 https://t.co/mF7Mt7fCyG

But Aamir Liaquat being savage and more aggressive, came back at him with even more elaboration:

Only an abcess filled with the pus of hatred and narcissism would’ve to write gibberish all the time to seek validation & prove his patriotism all the time, your TL is more about Pakistan than your ownself so we all know who is living a pathetic life.I know you’re undercover 🤫 https://t.co/BvPOoS1M4g

Aamir Liaquat had then further responded to Adnan Sami. Things got personal as Aamir Bhai called out Sami on his identity crisis hence the hatred for one’s ethnic community (a classic sign of unhealthy minority identity).

My frustrated eunuch!Actually you’re the breaking out of a rash on mucous membrane,disease is incurable,you are suffering from Identity crisis that’s why doing weird things.I don’t know which part of your body is suffering from pimple kapadia &why she is erupting again and again? https://t.co/DxQxYBsuKv

What is your say on Aamir Liaquat's tweets to Adnan Sami? Do you like the way Aamir Liaquat trolled him? Is this online feud adding any value or solution to the current tense situation between the arch-rivals? Let us know in the comments section below.