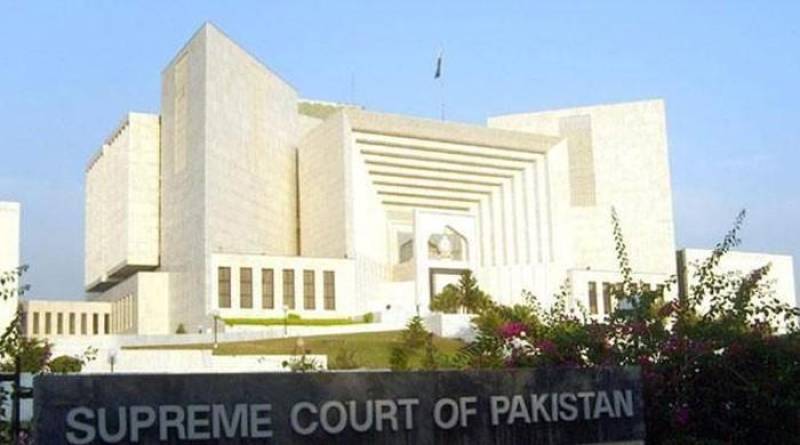 ISLAMABAD - A larger bench of Supreme Court of Pakistan adjourned the hearing of Panama Leaks case till Thursday (tomorrow) and sought details regarding services of PM Nawaz on key official positions.

Justice Asif Saeed Khosa announced that the apex court had decided to hear the case on daily basis adding that there would be no delay regarding the proceedings.

During today's hearing, Advocate Tariq Asad argued that the investigations should be done across the board and PTI chairman Imran Khan should also be made part of it as his name appeared in Panama papers.

PTI's counsel Naeem Bukhari kicked off his arguments by clarifying that he did not talk to media regarding the case, as Justice Azmat Saeed asked him to address the court instead of media.

He said that the premier was no longer trustworthy as he made false statements and should be disqualified, adding that Prime Minister himself claimed having documentary evidence related to investment in Dubai and Saudi Arabia.

He went on to say that Maryam Nawaz was made beneficial owner of offshore companies contrary to the claims of Sharif family, adding that Maryam Nawaz, along with her brothers Hassan and Hussain, had made false statements.

Naeem expressed that the Sharif family had not challenged the documents of ICIJ (International Consortium of Investigative Journalists) that unveiled Panama papers. He claimed that Maryam Nawaz was still dependent on the Sharif family.

He accused premier of evading tax and sought his disqualification, stating that NAB chairman had failed to perform his duties. Naeem maintained that the apex court should advise NAB to file an appeal regarding the decision of Lahore High Court in favour of Sharif family.

To this, Justice Asif Khosa remarked that both FBR ( Federal Board of Revenue ) and NAB (National Accountability Bureau) stated that the matter was out of their domain for any action. He expressed that the Supreme Judicial Council could be contacted for any action against Chairman NAB.

Naeem stated that a notice should also be served to Shahbaz Sharif in order to clarify a payment of Rs. 33 million dollars made in London. He maintained that Sharif family evaded tax during exchange of gifts between Nawaz Sharif and his children.

Justice Aijaz Ul Ahsan wanted to know whether there was any document suggesting that offshore company Nescol was owned by Hussain Nawaz in 1993 and categorically inquired: 'Who purchased the London flat'? to which Naeem replied: 'Offshore firm Nescol purchased the flat.'

Justice Aijaz inquired where the Sharif family had managed to obtain money for investment in Dubai and was supported by Justice Azmat Saeed who said that the Sharif family must put forth the bank transactions regarding transfer of money.

Justice Khosa told PTI's counsel Naeem Bukhari that he needed to prove that Sharif family owned the offshore companies before 2006. To this, Naeem expressed that the Sharif family had always owned those companies.

Justice Khosa also observed that there should be no press conference within the premises of apex court. He said that the reply by premier's sons stated that the London flats belonged to Al.Thani family but no document was presented in this regard.

The Supreme Court has adjourned the hearing till Thursday (tomorrow) and will not be conducting a hearing everyday.

Today's hearing was the first hearing for 2017 and Justice Asif Saeed Khosa is now the head of the five-member bench while Justice Ejaz Afzal Khan, Justice Gulzar Ahmed, Justice Sheikh Azmat Saeed and Justice Ejazul Hasan are its members.

Talking to media outside Supreme Court, PTI representative Fawad Chaudhry expressed that the case would be wrapped up soon, adding that the hearing should not be in-camera.

On the other hand, Tariq Fazal Chaudhary of PML-N welcomed the decision for daily hearings and said that the government would satisfy masses and the apex court with regard to the Panama Leaks case. Talal Chaudhry, who also showed up in apex court while talking to newsmen said that the PTI was still persisting with the new allegations even though a new year had dawned, and a new bench had been constituted. He said that the party would accept the verdict regardless of the bench or judge involved.

Pakistan Tehreek-e-Insaf leader Shah Mahmood Qureshi, while speaking on a Geo News program, said that the change of lawyers from the premier and his family a day before the hearing is a delaying tactic, as the new lawyers would now request for more time from the judges to prepare for the case.

Earlier, PTI chairman Imran Khan said his party had dug out several documents which revealed that Maryam Nawaz was the actual owner of the Mayfair Flats.

Strict security arrangements were made by the apex court for proper court decorum and smooth hearing of the case.

Due to limited seating capacity, the court administration had announced that entry would be regulated through special security passes.