Pakistan ranked 159 on list of 180 countries on media freedom 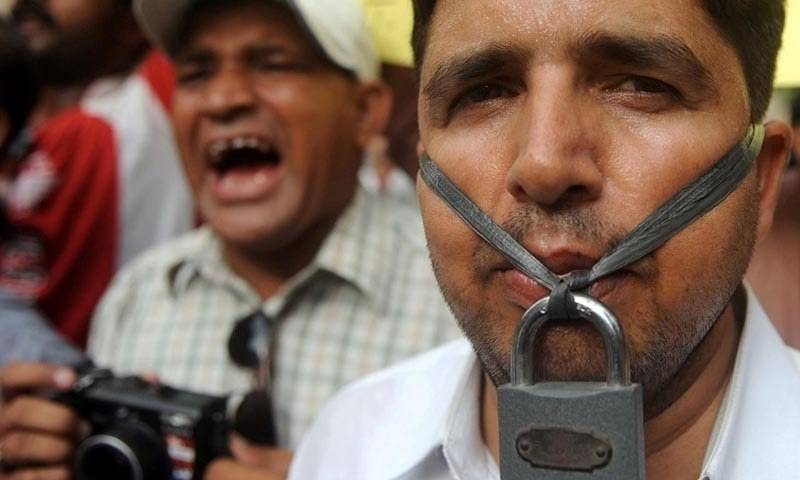 WASHNIGTON (Web Desk) - Reporters Without Borders, which campaigns for media freedom around the world, issued a freedom index on Sunday to mark the World Press Freedom Day.

According to this index, Finland tops the list of the countries with a free media, followed by two other Scandinavian countries - Norway and Denmark.

Eritrea is at the bottom along with Turkmenistan and North Korea.

China, Cuba, Zimbabwe and Afghanistan are also at the bottom.

The United States dropped from 20 in 2010 to 49 in 2015, four steps above Haiti, Burkina Faso, Namibia and El Salvador. Suriname, Samoa and the eastern Caribbean rank higher than the United States.

Frequent police and public attacks on journalists, coercion to reveal sources and the government’s failure to pass a law protecting journalists caused this fall.

The report points out that last month, a Pakistani parliamentary committee approved a draconian law for controlling the Internet.

Reporters Without Borders notes that the latest draft of the Prevention of Electronic Crimes Act “undermines civil liberties in Pakistan and flouts freedom of the media and information”.

It also notes that the bill contains provisions that would allow the government to censor any content without referring to judge, to use overly broad criteria to criminalise many online activities, and to gain access to Internet user data without any judicial control.

The report also noted that there has been a resurgence of violent attacks on media groups that criticise the military, including the ISI. During 2014, non-state actors also continued to target journalists, the report adds.

The report points out that Pakistan Tehreek-i-Insaf also attacked journalists who criticised its activities.

Two journalists were gunned down in October, bringing the number murdered since August to four.

Also in July, unidentified people bombed the home of the Peshawar bureau chief of a Pakistani television channel.

In May and June, a journalist was attacked in Multan and trucks carrying newspapers were torched.

In June, the Pakistan Electronic Media Regulatory Authority temporarily closed the transmission of a television channel in various areas.

Uncertain security conditions, risk of terrorism related activities and overwhelming political influence have been all cited as the reasons behind Pakistani media’s lack of freedom.

Media freedom worldwide suffered a “drastic decline” last year in part because of extremist groups such as Islamic State and Boko Haram, Without Borders said in its annual evaluation released Thursday.

“There has been an overall deterioration linked to very different factors, with information wars, and action by non-state groups acting like news despots,” the head of the Paris-based group, Christophe Deloire, told AFP.

All parties in conflicts raging in the Middle East and Ukraine were waging “a fearsome information war” where media personnel were directly targeted to be killed, captured or pressured to relay propaganda, it said.

The Islamic State group active in Syria and Iraq, Boko Haram in northern Nigeria and Cameroon, and criminal organisations in Italy and Latin America all used “fear and reprisals to silence journalists and bloggers who dare to investigate or refuse to act as their mouthpieces,” said the watchdog, known by its French initials RSF.

North Africa and the Middle East contained notable “black holes” in which “entire regions are controlled by non-state groups in which independent information simply does not exist,” the group said.

“The criminalisation of blasphemy endangers freedom of information in around half of the world's countries,” the report said, noting that religious extremists sometimes also go after journalists or bloggers they believe do not sufficiently respect their religion.

RSF's ranking put Iran, China, Syria and North Korea among the countries with the very worst levels of press freedom out of the 180 evaluated.

Repression of journalists in Ukraine during its early-2014 uprising against its pro-Kremlin president, and in Turkey during anti-government demonstrations earned both spots in the bottom quarter of the table.

“Police misconduct” during the Occupy Central protests in Hong Kong earned that territory a slide to 70th position.

The best-rated nations were northern European states such as Finland, Norway, Denmark, the Netherlands and Sweden, with New Zealand, Canada and Jamaica also making the top 10.

The United States ranked 49, three spots lower than in the previous report, in part because of what RSF said was the US government's “war on information” against WikiLeaks and others.

In South America, Venezuela stood out with a 20-notch fall to a ranking of 137 due to the National Bolivarian Guard opening fire on clearly identified journalists during demonstrations.

Libya dropped 17 places to 154 because of the national chaos that has seen seven journalists murdered and 37 kidnapped.

Russia slipped to the 152nd spot after introducing “another string of draconian laws,” website blocking and the extinction of independent media.

“Press freedom... is in retreat on all five continents,” RSF declared, claiming its indicators were “incontestable”.arrying newspapers were torched.