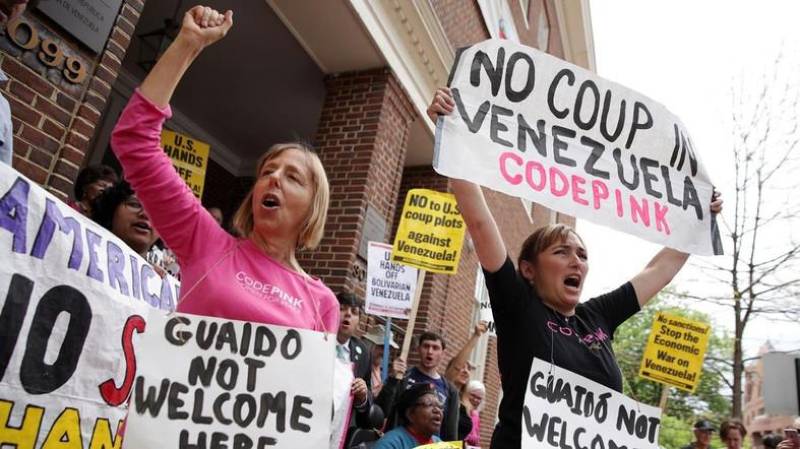 WASHINGTON - A supporter of the Venezuela Embassy Protection Collective, Ariel Gold was arrested by police in Washington for giving bread to other activists inside Venezuela's embassy, defining the food as a missile.

Gold was caught after she tossed a french bread to the protectors of the embassy who remain inside the embassy, however, the humanitarian gesture was defined 'throwing missile' in the police report on Thursday.

The National Co-Director of peace group CODEPINK also shared the video showing her providing food to the fellows, however, the bread was taken as a missile by the law enforcers in a move not to be termed as a mistake.

My food "missile throwing" that got me arrested today. Ironic the US-bomb so many countries-is putting me on trial.... pic.twitter.com/fhYkqMr7nD

In the report shared online, Gold was also alleged of simple assault, contrary to the videos shared by the activist herself in which she could be seen being assaulted by supporters of Juan Guaidó - the politician who is trying to topple the regime allegedly in collaboration with US.

Yes this is true. Peace activist @ArielElyseGold was arrested at DC Venezuela embassy for tossing food to the hungry people under siege inside. Her charge: TOSSING MISSILES!!! pic.twitter.com/ZQMvJCMKB9

Gold accused the police of hypocrisy highlighting an earlier incident wherein a right-wing Guaido supporter smashed windows at the embassy, but got away easily.

Upon her release, Gold said via Twitter, “I have been charged with [bread] missile throwing. I hope this US Federal government takes this to trial. Oh the irony."

By blocking access to the embassy, Guaidó supporters prevented food and medicine from reaching those inside, however, interestingly after arresting Gold, the police allowed the entry of food and medicine into the building.

Update at the Venezuelan Embassy: the police has just allowed food and medicine to be transported into the building. So then why was @ArielElyseGold and another member of the Collective arrested while trying to do just that?

Code Pink and other activists have been protecting the Venezuelan embassy from the supporters and representatives of self-proclaimed interim president of Venezuela Juan Guaido who have sought to usurp control of the building.

The activists are in the embassy by invitation of Venezuela's elected leader President Nicolas Maduro, however, are clashing with Guaido supporters.

Venezuela is wading through a political crisis as a coup, allegedly backed by Trump administration to topple Maduro failed, however, the supporters of Guaido are trying to seize control of the embassy which is under the authority of Maduro.