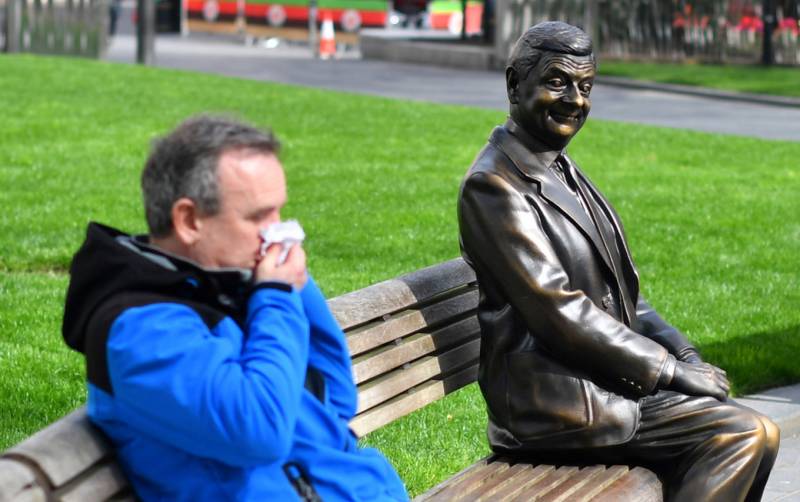 Some countries have reported new lows for deaths as they tend to ease restrictions, while the situation in other countries remains grim.

Turkey's Health Minister Fahrettin Koca announced 61 new deaths from COVID-19 in the past 24 hours, the lowest number in over a month. The country's total death toll stands at 3,397. About 1,670 more cases have been confirmed with the total number of infections reaching 126,045.

"For the first time today, the number of healed patients has exceeded our current number of coronavirus patients since March 11," Koca said.

A total of 63,151 patients have recovered, including 4,892 patients who were discharged from hospitals on Sunday.

Turkey reported the first COVID-19 case on March 11. Over the past two weeks, both the number of new cases and daily death figures have declined.

Some Turkish business owners are planning to resume operations, especially after Turkish President Recep Tayyip Erdogan said that the government will ease its curfew and other lockdown measures at the end of May.

Iran, the second hardest-hit country in the middle East, has also witnessed a downward trend of infection cases and death toll.

In the past 24 hours, the country reported 976 new infections, bringing the total tally to 97,424, according to the Iranian Health Ministry.

Iran has so far recorded 97,424 coronavirus infections with 6,203 deaths. The country announced its first case of Feb.

The Iranian government did not impose a total lockdown as seen in many other countries, but did close schools and banned public gatherings.

The authorities have approved the reopening of businesses in phases since April 11. Mosques will reopen in 132 Iranian towns designated as low-risk areas on Monday, President Hassan Rouhani has said.

Italy's daily new deaths from COVID-19 dropped to 174 on Sunday, the lowest since the start of the lockdown on March 10. Both the number of new infections and patients in intensive care has continued to fall.

Starting from Monday, the country is relaxing its lockdown. People will be allowed to visit family members living in the same region, and bars and restaurants will provide takeaway options instead of only delivery. However, schools, cinemas and most shops will remain shut.

The lockdown will be eased in further stages at two-week increments, on May 18 and June 1, provided the data related to the outbreak continue to improve.

Prime Minister Giuseppe Conte warned that the easing did not mean "everyone was free" to do as they pleased, saying that if Italians did not obey the rules, they risked reversing the dramatic gains reached so far.

Italy's death toll stands at 28,884, second only to the United States where more than 68,000 people have died.

Similarly, France is planning to lift the two-month lockdown on May 11 by gradually opening schools and shops and unwinding restrictions on people's movement as the spread of COVID-19 slowed down in the last three weeks.

The government will extend the state of health emergency it declared on March 24 by another two months to stem the outbreak and address a possible resurgence of the virus.

"We must not relax our collective efforts which are bearing fruit and which are effectively curbing the epidemic. To succeed in the gradual lifting of containment, it is more than ever necessary to scrupulously apply all barrier gestures, respect the minimum physical distance of one meter and reduce contacts," the Health Ministry said.

Figures released on Sunday showed that coronavirus-linked fatalities in France rose by 135 to 24,895, the lowest daily toll since March 22.

Among the 25,815 hospitalized patients, 3,819 were in intensive care, down from 3,827 on Saturday, confirming a continued slowdown for the third running week.

In Russia, COVID-19 infections showed no signs of abatement. The country reported a new single-day record with 10,633 cases confirmed over the last 24 hours, raising its total number of infections to 134,687.

The death toll from the pandemic increased by 58 to 1,280 on Sunday, while 16,639 people have recovered, including 1,626 over the last 24 hours, the country's coronavirus response center said in a statement.

About 2 percent of Moscow residents, or more than 250,000 people, may have the coronavirus, said Mayor Sergei Sobyanin, citing test results.

There is no reason to think that the pandemic situation has stabilized in the country and safety rules can be ignored, the Russian Health Ministry said in a statement.

Thousands of miles away, South Africa reported on Sunday a sharp surge in new cases, two days after the easing of restrictions following a five-week lockdown. It was the highest daily surge since March 5, when the country recorded its first case.

"Regrettably, we report a further eight COVID-19 related deaths: two from the Western Cape, four from the Eastern Cape and two from Gauteng," Mkhize said, adding that this brought the national death count to 131.

Amid the partial resumption of business activities, the government announced strict measures to stem the spread of the virus at workplaces.

These measures include setting up physical barriers at workplaces to ensure social distancing, free provision of appropriate personal protective equipment, screening of workers for COVID-19 symptoms, and isolation and quarantine of workers with related symptoms.