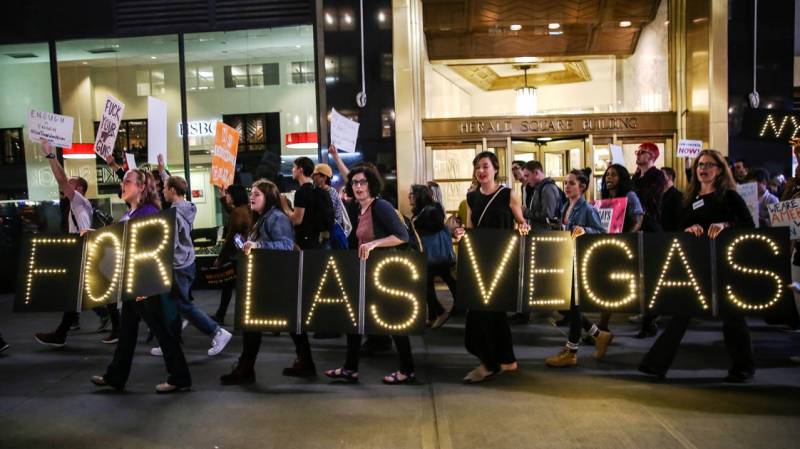 Following the horrific event of Las Vegas shooting that took about 50 lives and injured over 500 people, celebrities have come forward condemning the act and paying their condolences to the public affected.

It is noted that the incident happened as Jason Aldean was performing on stage at Rotue 91 Harvest Festival.

One of the most emotional reactions to the incident came from Jimmy Kimmel, who happens to hail from Vegas. In his message he said, "When someone with a beard attacks us, we tap phones, we invoke travel bans, we build walls. But when an American buys a gun and kills other Americans then there's nothing we can do about that because of the second amendment, I guess. Our forefathers wanted us to have AK-47s is the argument, I assume."

In response to Paul Ryan, Lady Gaga came forward and tweeted a heartfelt message to everyone on twitter.

Prayers are important but @SpeakerRyan @realDonaldTrump blood is on the hands of those who have power to legislate. #GunControl act quickly. https://t.co/bXZQ7enuEp

America woke up to heartbreaking news from Las Vegas. We stand united in our shock, our condolences, & our prayers. https://t.co/dKqjJqPIpu pic.twitter.com/B67cklsBkS

Other stars including Ariana Grande, John Mayer,  Mariah Carey, Celine Dion, Madonna, Serena Williams, Taylor Swift, Blake Shelton, Pakistani actor Hamza Ali Abbasi and countless others posted on their social media to show support for the victims of this tragedy. They condemned the act and prayed for the families who suffered a great loss.

My heart is breaking for Las Vegas. We need love, unity, peace, gun control & for people to look at this & call this what it is = terrorism.

1) (THREAD) I’m going to state my thoughts without the words “gun control” “assault rifles” and others that stoke reflexive debate.

Horrified to hear about the shooting in #LasVegas. My thoughts are with the victims and their families. Praying for everyone's safety 🙏💔

Praying for all the innocent victims and their families in Las Vegas - Céline xx... #LasVegas

What can I say? What can we do? I am heartbroken for the Las Vegas victims. I am praying for the families the victims& honestly our futures

There are no words to express the helplessness and sorrow my broken heart feels for the victims in Vegas and their families.

My deepest sympathies and prayers to anyone has been affected by the Vegas shooting last night. I don't even know anymore... Why?

So its Terrorism only when the killer is Muslim, preferably asian or arab, otherwise its just a mass shooting. Prayers for #LasVegas

Our deepest condolences to the ones who suffered from this terrible incident.