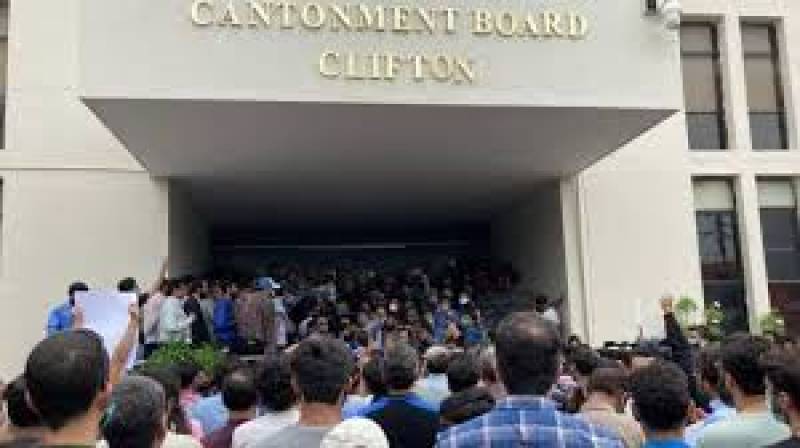 KARACHI - Cantonment Board Clifton (CBC) has lodged a First Information Report (FIR) against the Defence Housimg Authority (DHA) residents for staging protest demanding their basic rights outside the CBC office.

According to media details, three days ago, hundreds of protestors, comprising men, women, and children staged the protest after their houses were submerged in heavy monsoon rains.

The DHA residents were protesting against the lack of services, master planning, unhygienic conditions and lack of authority’s response during the monsoon flooding crisis which destroyed their valuable property.

The CBC officials met the protestor’s delegation and assured them to fulfill their demands but after the negotiations they lodged the FIR against them.

As many as 22 people and some unidentified people have been nominated in the case registered by CBC employee Munawwar Hussain at the Darakhshan police station.

The FIR claims that a group people forcefully entered the CBC building on Khayaban-e-Rahat, interfered with the work of CBC employees, spread terror and destroyed its property.

The police have launched investigation into the matter.

Meanwhile the protestors and social activists have urged the Chief Justice of Pakistan to take notice of the matter.

DHA/CBC is officially an extortion racket. FIR registered against those who protested for their due rights. DHA/CBC will tax you and not give you any services and if you protest you will be harassed with criminal action. We are not paying taxes we are paying extortion money. pic.twitter.com/0RjGLuKcGu