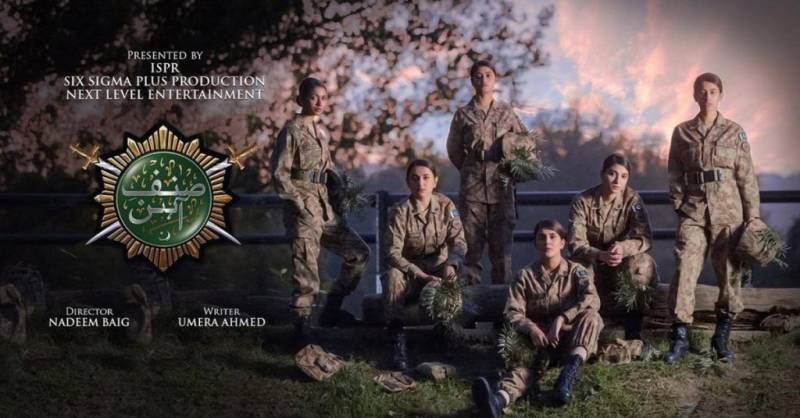 Popular drama Sinf-e-Aahan has won a devoted fan following owing to its spectacular storyline which focuses on patriotism, camaraderie and progressive thoughts.

The star-studded drama serial brilliantly highlights the struggles of all the characters. This week, the audience witnessed Syra Yousuf’s character ‘Arzoo’ breaking the shackles of a toxic relationship and realizing her worth.

It shows Nouraiz harassing his ex-fiancée Arzoo again, but this time, Major Usama, who plays an instructor at Pakistan Military Academy (PMA) intervenes and set the record straight.

However, the netizens have mixed responses regarding this scene. Many showered praise on Arzoo for finally breaking free. Others believed that the senior officer's meddling was unnecessary and Arzoo should have approached the cyber-crime wing.

Join PMA , it will help you in Mommy issues,daddy issues, sardar issues ,ego issues and so so on.

If you are suffering from Parental issues, BF issues, Ego issues, Marriage issues and want to fix them. Join PMA! #SinfeAahan pic.twitter.com/mXmROisat0

Aarzoo from #SinfeAahan, played by #SyraYousuf is such an emotionally satisfying character; to observe the journey of a woman realizing her self-worth and shedding a toxic relationship as allys support her growth — this is sort of women oriented content Pakistan’s media needs!

So this is Arzu Daniel’s journey in #SinfeAahan

One of the most beautiful development of a character has been of this girl, who was meek, exploited by her toxic ex and poor. In this thread I am going to enclose all the vids I can find of her. How she acquires confidence

Penned by Umera Ahmed, Sinf-e-Aahan is a project announced in collaboration with ISPR and is co-produced by Humayun Saeed, Samina Humayun Saeed, Shahzad Nasib, and Sana Shahnawaz.

The star-studded drama serial Sinf e Aahan has finally hit the screens and has been winning hearts. Needless to say, ...