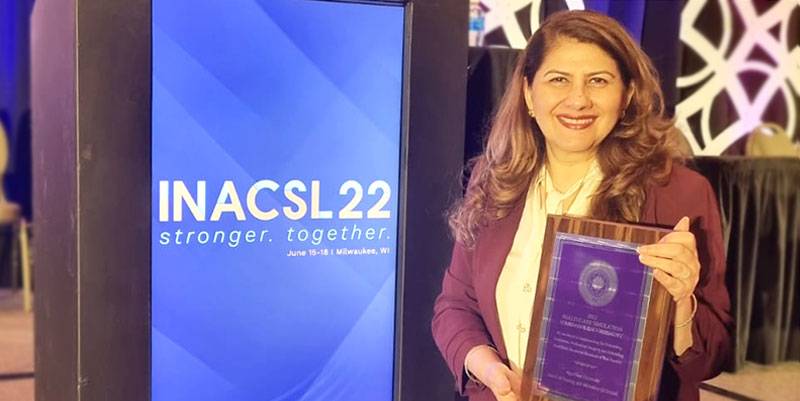 A great achievement for the Pakistani nursing fraternity as Dr. Rozina Karmaliani has secured herself as the first Pakistani nurse to be inducted as a Fellow of the American Academy of Nursing (AAN), effective in October 29, 2022, in Washington, DC.

AAN is ranked among the largest international organisations of nursing, which has provided many generations in the healthcare sector with nursing knowledge and practices worldwide.

Dr. Karmaliani is the current dean of the Aga Khan University School of Nursing and Midwifery (AKU-SONAM). The iron lady is listed among nearly 3,000 AAN fellows from across the world who have been inducted in the past 50 years.

Only if this wasn't a milestone she achieved, Dr. Karmaliani also became the first nurse from the Central and South Asian regions to be inducted into the AAN.

“I am truly honored to be representing Pakistan on such an important global platform,” Dr. Karmaliani said.

She further added, “With the rapidly shifting trends in healthcare, it is crucial for nurses from the developing world to have a seat on the table where important policy dialogues and decision-making takes place, so they can have a bigger impact on healthcare outcomes and nursing practice on this side of the world.”

The AAN Fellowship is the highest honor bestowed to nursing professionals in healthcare through education, practice, research, and policy. The nomination and selection of members is a rigorous process. The inductees are expected to make an impact on future healthcare policies.

Dr. Karmaliani has been associated with Aga Khan University for nearly three decades.

QUETTA – Mehwish Sharif, who is currently deployed at the tuberculosis ward of the Fatima Jinnah Chest Hospital ...