BANvPAK: Rain frustrates Shaheens and Tigers as Day 2 of second Test washed out 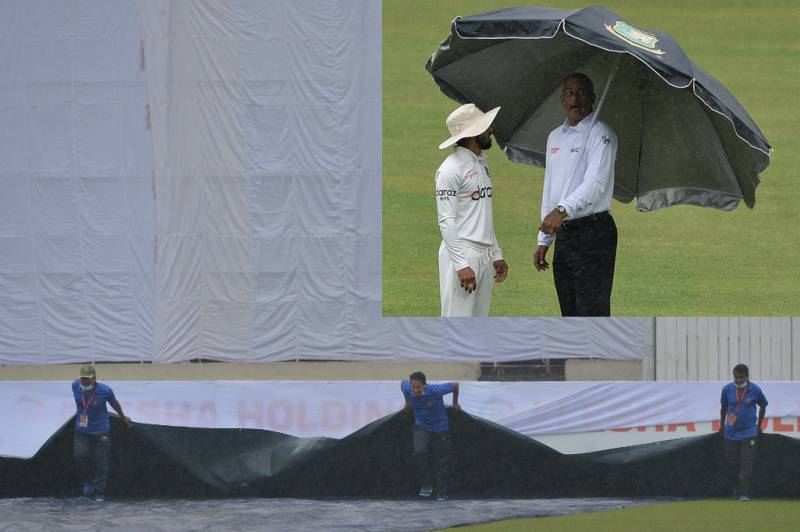 DHAKA – Pakistan, and Bangladesh were left kicking their heels after playing just 6 over after downpour hamper Day 2 of the second Test.

The game did not get started until after lunch with the visitors reaching 188-2, adding 27 from their first day total. The play had resumed after lunch, following rain and bad light that saw the morning session in Dhaka called off.

Azhar Ali struck back-to-back boundaries off pacer Ebadot Hossain to complete his 34th Test fifty before the game called off at 3:00 pm local time. Ali was batting alongside Captain Babar Azam – who added 11 runs – including a boundary off the first ball of the day and remains unbeaten on 71.

Day three is now scheduled to start at 9:30 am local time. Babar-led squad leads the two-match series 1-0 after winning the first Test in Chittagong by eight wickets.

Earlier on Day 1, 57 overs of play were possible on Saturday, when Shaheens reached 161-2. Day one of the second Test was halted due to bad light and it was said that the game will be resumed half an hour ahead of the scheduled time.

Pakistan earlier fielded an unchanged squad from the first Test while the hosts handed Mahmudul Hasan a Test debut and brought in Shakib Al Hasan and Khaled Ahmed in three changes to the team. Saif Hassan, Yasir Ali, and Abu Jayed had been dropped from the opening Test.