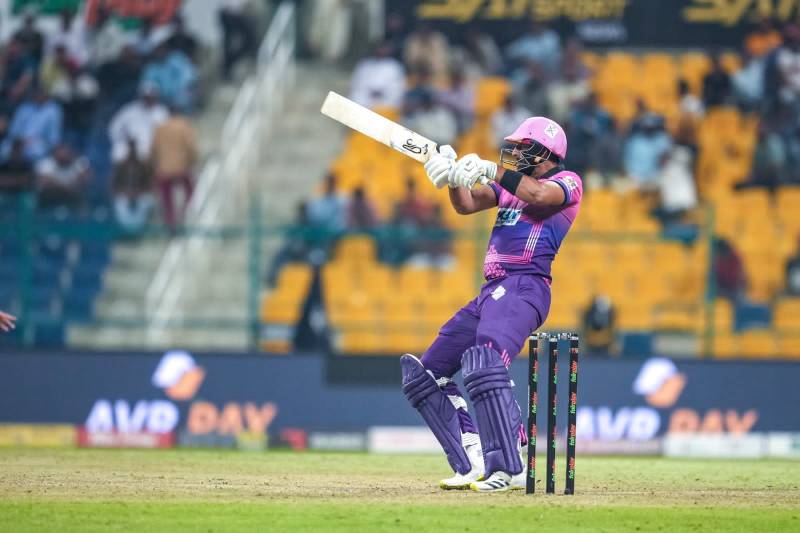 New York Strikers booked their place in the final of the sixth edition of the Abu Dhabi T10 through a well-fought four-wicket win over Samp Army in the Qualifier 1 match held at the Abu Dhabi Zayed Cricket Stadium on Saturday.

UAE opener Muhammad Waseem made the local fans proud through a responsible unbeaten knock of 36 to ensure New York Strikers the victory. New York Strikers’s bowlers too produced a fine display of disciplined bowling to restrict Samp Army to 81 for 9.

Chasing the moderate score, though New York Strikers lost five wickets for 46 runs at the half way stage, Waseem through his defiant unbeaten 36 carried New York Strikers to the trarget with nine balls to spare.  Waseem’s knock which came off 16 balls had three boundaries and three sixes.

New York Strikers won the toss and elected to field. Samp Army were off to a disastrous start losing two wickets in the first over from Akeal Hosein. With the fourth ball he had Johnson Charles, who went for a big shot to mid-wicket, miss the ball and get clean bowled for 1, and with the next ball he clean bowled Karim Janat with a delivery that swung in to hit his off stump.

Skipper Moeen Ali hit the second ball of the second over from Matiullah Khan over extra cover for a boundary. Basil Hameed began by hitting Matiullah over the cover for a six. Fifteen runs came off that over.

Moeen as well as Basil could not take any liberties in the third over bowled by Hosein. In fact, Hosein would have got Moeen out with the fifth delivery but for Jordan Thompson dropping the easy catch at long on.  Hosein gave away just four runs in that over.

Basil Hameed fell in the next over to Ravi Rampaul clean bowled for 9.  Rampaul also struck with the fourth ball having Moeen Ali caught by Thompson, who had dropped him earlier, but this time at deep mid-wicket for 12. Thompson also made an acrobatic effort at the mid-wicket boundary line to catch Dwaine Pretorius off Rashid Khan. The hit eluded Thompson’s outstretched hands and went for a six. Pretorius also hit the third ball from Rashid Khan for another six to mid-wicket. At the half way mark, Samp Army were 46 for 4.

Samp Army’s half the side was back in the dug-out for 46 when Pretorius got caught by Rashid Khan at long-off off Thompson for 15. David Miller walked in and hit the first ball he faced through the extra cover for a boundary. More disaster followed for Samp Army when Shimron Hetmyer got run out to a direct throw from Paul Stirling for 1. Chamika Karunaratne picked a boundary off Rashid Khan’s fourth ball of the seventh over.

The regular fall of wickets continued in the eight over too when Wahab Riaz had Karunaratne caught at long on by Kieron Pollard for 5. David Miller hit a six pulling Thompson to backward square leg but fell to the next ball hitting in the air to Matiullah Khan at point for 13. The last over bowled by Wahab Riaz yielded only six runs. He also dismissed Sheldon Cottrell with the last ball of the innings for 6, caught by Stirling at short third man. Samp Army was thus restricted to 81 for 9 in 10 overs.

New York Strikers began their chase through the consistent Eoin Morgan and Paul Stirling.  Morgan gave an aggressive start hitting Cottrell’s third and fourth deliveries of the first over for sixes. The first six went over long on and second over mid-wicket. Mahesh Theekshana clean bowled Stirling with the second ball of the second over.

Muhammad Waseem, fresh from his unbeaten 45 against Team Abu Dhabi in his last match on Friday, hit Theekshana’s last delivery for a six over extra cover. Karim Janat picked the prize wicket of Morgan clean bowled for 14 with the fifth ball of the third over.

Waseem hit Pretorius’s third delivery for another six over long off. Azam Khan too hit the fifth ball from Pretorius for a boundary.  Theekshana struck twice in the fifth over. With fifth ball of the fifth over he had Azam Khan caught at long-off by Karunaratne for 12 and with the next ball he had Jordan Thompson caught behind by wicketkeeper Johnson Charles.

Waseem continued to score freely undaunted by the fall of wickets. He hit Karim Janat for a six to long-off the second delivery. and cut the next ball past backward point for a boundary. Off the fifth and sixth ball, Waseem picked boundaries to make it 18 runs from the last 24 balls.

Kieron Pollard fell for a duck to the first ball of the seventh over, caught and bowled by Karunaratne. Rashid Khan reduced the tension with a boundary to mid-wicket.

New York Strikers needed 11 runs from the next three overs. Rashid Khan hit a boundary off Cottrell to reduce the margin but Cottrell had him caught behind for 9 when seven runs were needed in the next 13 balls.  Hosein hit Karunaratne’s third delivery of the ninth over through the covers for a boundary to ensure his team a place in the final. Waseem remained unbeaten on 36.

Player of the Match: Muhammad Waseem