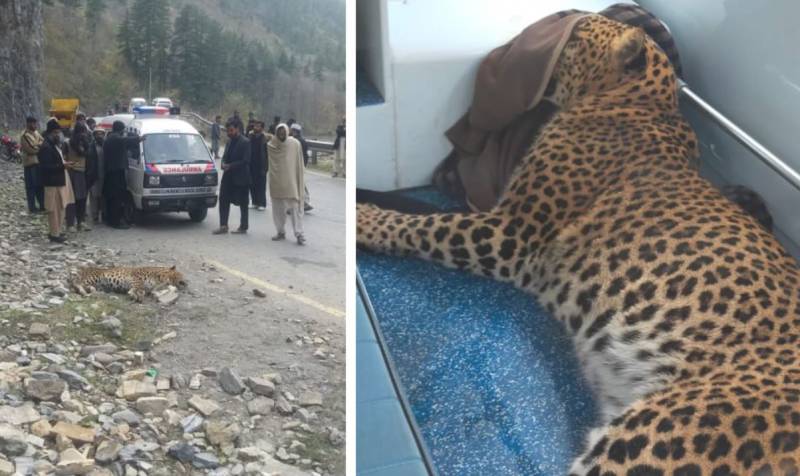 MANSEHRA – A rare leopard that was rescued for treatment after being found in an injured condition died on Monday.

The big cat reportedly died from his wounds after falling from a cliff in the northwestern region. Locals with the wildlife department’s help rescued the endangered animal in an injured state near Malakandi and shifted it to the Dhodial Pheasantry.

Wildlife Management Board official Rina Satti shared an update in a social media post, confirming the death of a male leopard who faced traumatic head damage while pursuing Gorals on cliffs.

Well done to pple of Kaghan in KP for showing compassion & rescuing leopard that fell down from high cliff while chasing gorals at least 200 ft high in Malakandi National Park. Leopard sent to Mansehra for medical care. We hope animal survives ⁦@WildlifeBoard⁩ ready to help pic.twitter.com/9SxIvDJoit

Sad to report this beautiful young male common leopard died from his injuries after falling from cliff in Kaghan in KP despite best efforts by @WildlifeKPGovt to save him. Severe head injury. He was chasing Gorals on cliffs & fell almost 200 ft. Nature can be cruel @WildlifeBoard pic.twitter.com/m9vNx0dtU8

The number of these endangered big cats has increased in recent times in light of ongoing conservation efforts.

Locals also spotted the four-legged carnivores in other parts of the country. Last month, residents of Saidpur village spotted multiple leopards and informed the wildlife and law enforcers who cleared the area.