EXPLAINER: Biden's Iran problem is getting worse by the day 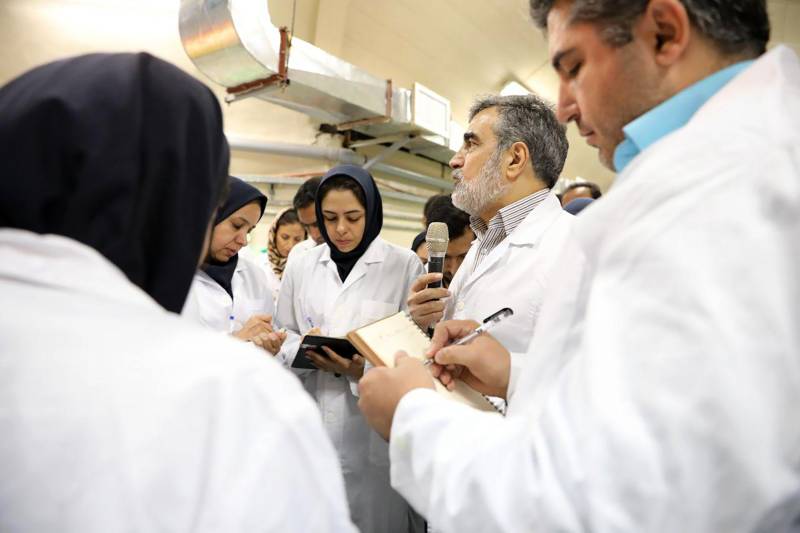 WASHINGTON (AP) — Joe Biden has an Iran problem. And, it’s getting more complicated by the day. Thanks to provocative moves by Iran and less-than-coherent actions by the outgoing Trump administration, the president-elect is facing an increasingly uncertain situation when it comes to Iran, a decades-long American nemesis that has been a target of blame for much of the Middle East's instability,

In the past week alone, President Donald Trump’s team has dispatched B-52 bombers to the Persian Gulf in response to alleged Iranian attack planning and reversed an order to bring home the USS Nimitz, the only U.S. aircraft carrier in the region.

On Monday, Iran not only announced it had resumed advanced uranium enrichment in violation of the 2015 nuclear deal but also seized a South Korean-flagged oil tanker and its crew. This combustible combination coming just two weeks before the president-elect’s inauguration threatens to derail or at least delay Biden's hopes to return the U.S. to the nuclear accord that Trump withdrew from in 2018.

A look at the latest developments:

DOES THIS AMOUNT TO A DANGEROUS ESCALATION OF TENSIONS?

Concerns have run high for some weeks about Iran stoking tensions, particularly around the Jan. 3 one-year anniversary of the U.S. killing of a top Iranian general in Iraq. U.S. officials have been on heightened alert for possible retaliation from Iran, including from allied militia in Iraq that have previously launched rockets at U.S. facilities in the country.

Although neither the enrichment announcement nor the seizure of the South Korean-flagged ship appeared linked to the death of the general, the two moves did raise tensions in the region, which has long been unpredictable.

Part of the worry is that a single wrong move — or intentional provocation — has the potential to trigger war.

There is no sign the U.S. is planning an attack on Iran, although Trump has said he would respond to any attack by Iran or its affiliated militias in Iraq that resulted in the death of an American. The U.S. military has long had a wide variety of weapons and troops in the Middle East that could be called on if hostilities broke out. But Trump himself has derided the idea of getting further mired in Middle East wars.

The scenario that worries U.S. military officials in Iran conducting an attack, either inside Iraq or elsewhere in the Gulf region, that would prompt Trump to retaliate, leading to an escalation that could spark a wider war. That is part of the reason the U.S. has kept an aircraft carrier in the region on a near-continuous basis since May 2019, when the White House first asserted that Iran was planning attacks on U.S. personnel.

WHY WOULD THE NIMITZ BE ORDERED HOME, THEN SENT BACK?

The highly unusual Nimitz flip-flop by the acting secretary of defence, Christopher Miller, seemed to undercut U.S. Central Command’s efforts to convince Iran that it would not pay to launch an attack on U.S. forces.

The huge vessel, with a complement of attack and support aircraft, was literally leaving the region when it received word to turn around and head back.

Sending the Nimitz home had been on the table for weeks since the carrier was on a lengthy deployment and was scheduled to be home by the end of 2020. Its tour was extended by a few weeks to provide backup for U.S. troop withdrawals in Afghanistan, Iraq and Somalia. But as tensions with Iran rose in mid-December, Central Command wanted to keep the Nimitz nearby. Instead, on Dec. 31, Miller announced that he had ordered it to return home. Three days later, he reversed himself and said it would stay.

Cancelling the go-home order for the Nimitz took some defense officials by surprise, suggesting that the decision may have been made at the White House rather than as a result of new arguments from military officers.

WHAT'S THE POINT OF FLYING B-52 BOMBERS IN THE GULF?

These long-range bomber flights aren’t commonplace, but they’ve become a bit more routine in recent weeks as a show of military might. There have been three B-52 bomber missions to the region in less than two months, most recently on Dec. 30.

The roundtrip flights from the United States are meant to show how quickly bombers can get to the area. They can be equipped with either conventional or nuclear missiles. Marine Gen. Frank McKenzie, the top U.S. commander for the Middle East, made the message clear this week, saying, “We do not seek conflict, but no one should underestimate our ability to defend our forces or to act decisively in response to any attack.”

WHAT DOES ALL THIS MEAN FOR BIDEN'S IRAN POLICY?

Biden’s transition team has declined to comment in detail about the latest developments and what they may mean for their plans. But, Biden and his top national security aides have laid out their approach to Iran in broad strokes. Top of that list is bringing Iran back into compliance with the nuclear deal and then expanding that pact to take into account non-nuclear behaviour that wasn’t covered by the initial agreement.

Iran, however, has said it will only return to compliance if the U.S. rejoins the deal and rescinds sanctions that Trump reimposed over the past two years. At the same time, Biden aides have said Iran cannot win sanctions relief unless and until it respects the deal.

Iran’s latest actions, coupled with the Trump administration’s movement of forces, complicate diplomacy and raise the risk of miscalculation, particularly as tensions continue to run high between Iran and its neighbours.

The increased tensions, which have triggered the highest alert levels for US personnel in Iraq, may make it difficult for the incoming Biden administration to pivot the military more aggressively toward Russia and China.