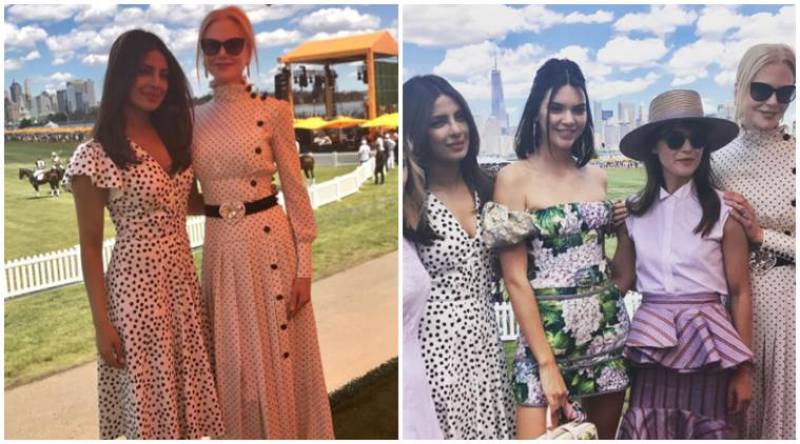 Priyanka Chopra, making headlines with her recent appearances alongside PM Narendra Modi in Berlin, Germany, and with Fast and Furious series actor Vin Diesel in their cheek-kissing sprees, has a lot more to add to all the reasons she is the latest talk of the town!

You'll be surprised to know that the Desi Girl was just spotted spending a perfect New York afternoon with none other than the renowned actress Nicole Kidman and supermodel Kendall Jenner!

The Quantico and Baywatch actress took to Twitter to share her experience with everyone after hanging out with the popular international celebrities!

We got the memo.. lol @nicolekidman #twinning ?❤️

According to reports, Priyanka met the stars as she attended an event at the Veuve Clicquot Polo Classic in New Jersey on Saturday. She sported a white sundress with black polka dots.

The former Miss World was also reported to open up and joke about the fact that her dress was similar to Kidman's dress, who opted to adorn herself in a long sleeved, ankle-length white dress with black polka dots.

Baywatch: The Movie has been recently released in India on Friday. Priyanka essays a negative role in the film, which has been adapted from the 1990s' popular TV series of the same name.

The film has so far fared poorly with critics internationally, with commentators describing the film as "shallow", "stupid", "misguided", and "wantonly crude."