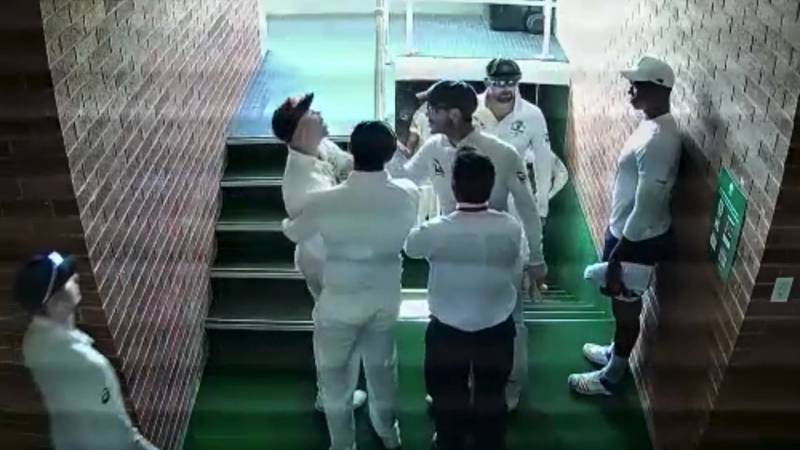 DURBAN - Australian vice-captain David Warner engaged in a verbal spat with South African batsman Quinton de Kock on the fourth day of the first test match on Sunday, which was captured from the players tunnel at Kingsmead, Newlands Stadium.

The skirmish started when Warner was at the centre of Australian celebrations following the run-out of AB de Villiers, however, the emotions boiled up off-field when the cricketers made their way to their respective dressing rooms.

The Wolf of Wall Street is a pretty wild movie #SAvAUS pic.twitter.com/qPgnFSxUCb

A CCTV footage showed Warner aggressively directing his words to de Kock, who walked out of the stadium with Australians as one of two not out batsmen at tea.

The Australian athlete was restrained from moving towards the Proteas' wicketkeeper-batsman by Usman Khawaja, and later Tim Paine before he was pushed away by captain Steve Smith.

It is officially unknown what led to the heated debate between the cricketing rivals, however, according to disputed reports, South Africans made disparaging comments about his wife.

Cricket Australia said a process would be taken before they comment further on the ugly incident but released a statement.

"Following the end of the second session (on day four) there was an incident involving David Warner and Quinton de Kock on return to the changerooms," said a CA statement.

What was said and done during that interval was regrettable from both sides. Quinton [de Kock] got personal and evoked an emotional response from Davey [Warner],’ said Smith to the media in the post-match press conference.

On the other hand, Proteas captain Faf du Plessis said both sides got personal in their chirping.

"Both parties, from what I heard, there was a lot of personal stuff said. I don’t know in what manner, but that’s why it went off the field. If you want to go personal, then it needs to stay on the field," said the captain.