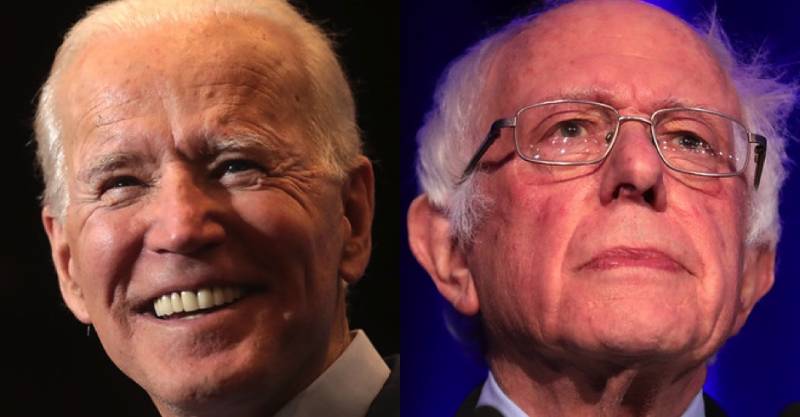 The latest count by 12 noon (local) 9 pm (PST) shows Biden won in Alaska, Arkansas, Massachusetts, Minnesota, North Carolina, Oklahoma Tennessee and Virginia, and also overturned all predictions to take delegate-rich Texas, where Sanders was expected to be a victor.

Sanders, a leftist politician politician, has taken Colorado, Utah and his home state Vermont and is leading in California, the state with the largest delegates. The two are in a dead heat in Maine.

Following our big wins on Super Tuesday, join us live for a reaction to results and an update on how we will win the nomination. https://t.co/seFx6nhf9w

So far, Biden is leading in the delegate count with 305 delegates to his credit in comparison to Sanders 243 while the candidates await full results from California. The AP has declared Sanders a winner in California and he is expected to clinch a major share of 415 pledged delegates.

Both Biden and Sanders sounded hopeful in the quest for Democratic nomination to fight theNovember election against President Donald Trump.

“They don’t call it Super Tuesday for nothing,” Biden said cheerfully as results of his comeback put him ahead of all other candidates, posing a challenge to Sanders whose political movement appeared to be invincible on the eve of Super Tuesday 14-state election.

Team, because of you we had an incredible Super Tuesday. Now, it's time to focus on beating Donald Trump. We can get him out of the White House with your help.

Please chip in a few dollars to help us win this thing: https://t.co/Fxrb2ujqWM pic.twitter.com/AOwK3JKR2i

Sander’s campaign has several members from diverse communities and latest polls show he has been consistently expanding his support among African-Americans ad Hispanic American communities across the country.

Sen. Sanders has taken clear positions in support of the struggle of Kashmiris and Palestinians for their unalienable rights.

Speaking at the annual conference of the Islamic Society of North America (ISNA) in September last year, Sanders called India’s repressive actions in Jammu and Kashmir as “unacceptable”.

“The communications blockade must be lifted immediately, and the United States government must speak out boldly in support of international humanitarian law and in support of a UN-backed peaceful resolution that respects the will of the Kashmiri people.”

Crucially, Sanders used the words “Kashmiri people,” a not-so-subtle signal that he accepts the existence of Kashmir as an independent political entity.

On Palestinian rights, Sanders has supported a two-state solution, emphasizing that “we must treat the Palestinian people with the respect and dignity they deserve.”