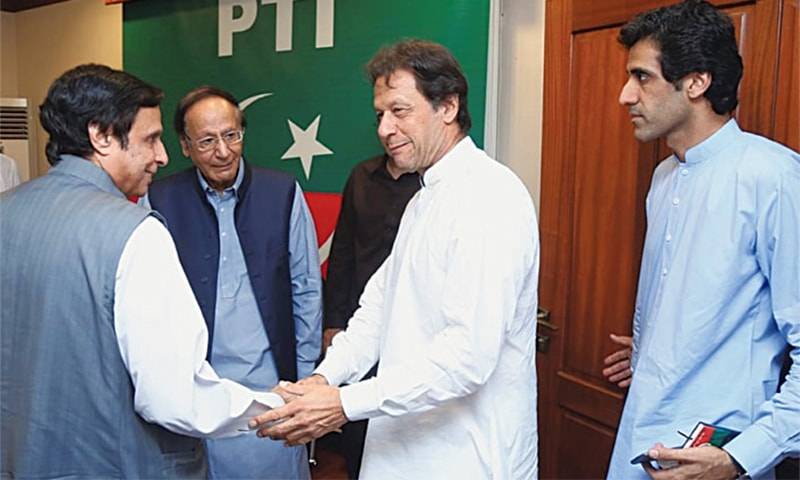 ISLAMABAD – Prime Minister Imran Khan Friday said that he has a lot of respect for Pakistan Muslim League-Quaid (PML-Q) top leadership after Chaudhry Pervaiz Elahi, the Punjab Assembly Speaker, announced to support him in National Assembly session for vote of confidence.

The premier expressed it after holding meeting with delegation of ally parties, including Muttahida Qaumi Movement (MQM) and the PML-Q.

The remarks however were taken by storm on micro-blogging site, Twitter, where users reminded him of how he used to call the Chaudhry brothers, today’s close ally, in the past.

A user recalled that the prime minister during his a fiery speech had called Pervaiz Elahi “biggest Dakko [dacoit]” of the Punjab.

Another Twitter users lamented that the premier can tolerate the “most corrupt party” but “his all honesty & rules are for janghir tareen & aleem khan who always stand firm with him in difficult time of his election journey”.

Imran khan can tolerant GDA, BAP, MQM and mostly PML-q the most corrupt party but his all honesty & rules are for janghir tareen & aleem khan who always stand firm with him in difficult time of his election journey. This is unfair khan. Plz think abt this. U need sincere ppl

A user shared a clip of his interview to a private news channel when he shied away from talking about his alliance with the PML-Q.

Here are some more reactions;