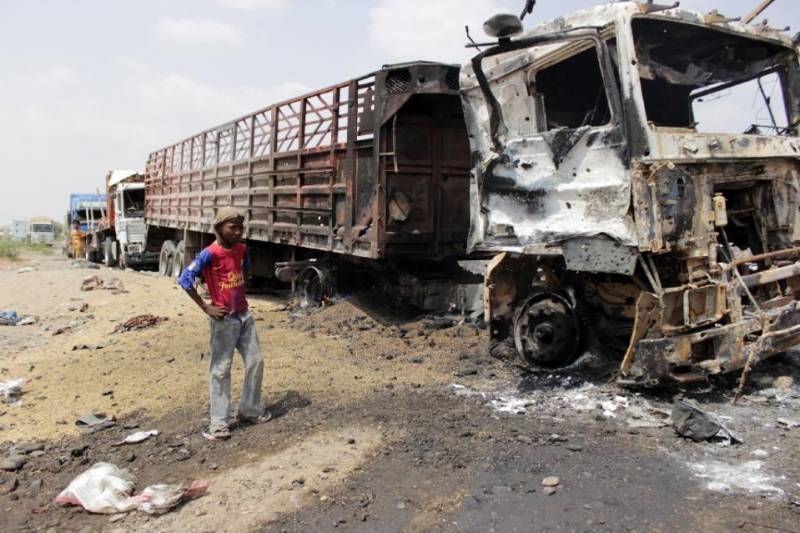 Relief workers have warned of a dire situation in the impoverished Arabian Peninsula state, where a Saudi-led coalition is waging an air war on the Iran-backed Huthi Shiite rebels.

Most of the 114 deaths in the past 24 hours occurred in fighting between rebels and loyalists of President Abedrabbo Mansour Hadi in the main southern city of Aden.

Seventeen civilians were among 53 people killed in Aden where fighting continued as rebels tried to seize a port in the city, which sits on an extinct volcano jutting out into the sea.

At least 19 Huthis and 15 pro-Hadi militiamen were killed overnight in the town of Daleh, north of Aden, officials said.

Seven more people were killed in the southern province of Abyan, where pro-Hadi fighters have laid siege to the base of a renegade army brigade loyal to ex-president Ali Abdullah Saleh, who is accused of backing the Huthis.

In nearby Lahj, coalition air strikes hit the strategic Al-Anad airbase and a nearby military camp, killing 10 rebels and forcing many others to flee, an army source and witnesses said.

In Shabwa province, eight rebels were killed in an air raid as two others died in clashes with tribes, sources said.

Hadi, considered by the UN to be Yemen's legitimate leader, took refuge in Aden in February after the Huthis, who hail from the mountainous north, seized power in Sanaa.

Hadi fled to Saudi Arabia last month as rebels advanced on his southern stronghold, prompting the military campaign by the Saudi-led coalition, now in its 12th day.

The fighting has drawn in an array of armed groups including the Huthis, pro-Hadi militia, army units loyal to Saleh, southern separatists, Sunni tribes and Al-Qaeda militants.

The Red Cross has appealed for an immediate truce to facilitate aid deliveries and allow people to seek water, food and medical assistance.

It has been trying to fly emergency supplies into Sanaa but the plane is still stuck on the tarmac.

"We have a cargo plane with medical supplies which is ready to go," said Sitara Jabeen, a spokeswoman for the International Committee of the Red Cross.

"We have the permission for this plane but we have logistical problems for the landing. There are less and less planes landing in Yemen. We are trying to solve the logistic problems," she told AFP.

The Red Cross is also trying to deploy a team of surgeons to Aden, but says it is still awaiting authorisations from all sides in the fighting.

It has called for all land, air and sea routes to be immediately opened to allow the delivery of 48 tonnes of medical supplies the organisation has ready to treat up to 3,000 wounded.

Three Indian aircraft and one Russian plane were seen landing in the capital Monday to evacuate their citizens, as Jordan said it had evacuated almost 300 nationals.

Russia has urged the UN Security Council to push for a humanitarian pause in the strikes waged by Saudi Arabia and a coalition of five Gulf monarchies, Egypt, Jordan, Morocco and Sudan.

Pakistan said Monday it had been asked by Saudi Arabia to contribute aircraft, ships and ground troops to Operation Decisive Storm.

Despite close ties with Riyadh, Pakistan has so far held back from joining the offensive, saying it does not want to get involved in any conflict that would inflame sectarian tensions.

Shiite Iran has strongly criticised the intervention in Yemen and has rejected accusations of arming the Huthis.

Its foreign minister, Mohammad Javad Zarif, is due to visit Islamabad on Wednesday to discuss the situation, said Pakistani Defence Minister Khawaja Asif.

In Riyadh, the Saudi cabinet reiterated that the Sunni monarchy "is not seeking war" and that the offensive was to "rescue a neighbouring country... and its legitimate authority".