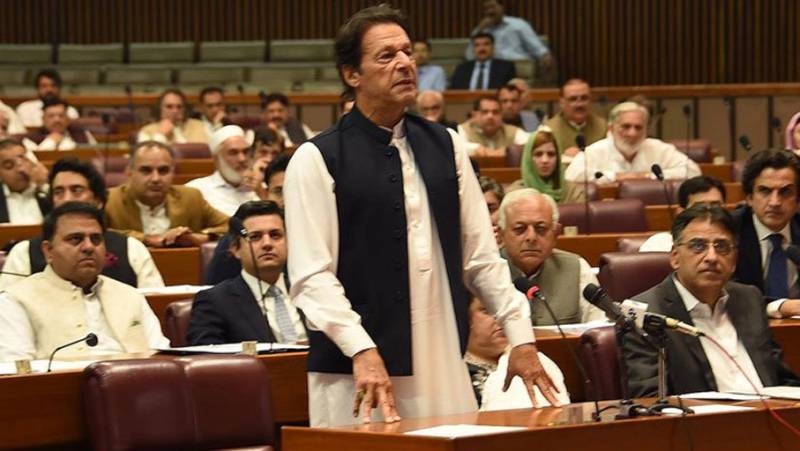 The premier started his speech after Leader of the Opposition in the National Assembly, Shehbaz Sharif asked his fellows to listen to premier's speech with patience.

In his policy statement on Tuesday, the premier said he gave a message to India that if it takes one step forward, we will take two but regretted that India was not serious for talks and it will further try to crush Kashmiris and suppress their movement.

The prime minister informed the legislators that repealing Article 370 was part of BJP’s election manifesto, saying their forefathers were from the RSS.

The prime minister stressed that the Kashmir struggle would intensify after India's move of abolishing articles related to Kashmir.

"They [BJP] do not consider Kashmiris as their equals and they will try to crush them which will lead to a reaction which in turn can cause Pulwama like incident," the premier asserted and feared that they will blame Pakistan for this.

"They will blame Pakistan again. We'll then respond them accordingly and this can lead to an unending fight," the premier said and warned that India was preparing for ethnic cleansing in Kashmir to subjugate the Muslims in the restive valley.

Prime Minister Imran Khan shared that India had decided not to talk to Pakistan, a visible indication of which was New Delhi's response during the SCO summit in Bishkek.

"I kept telling India after Pulwama that two nuclear-armed neighbors cannot take such risks and we should resolve our problems through dialogue," the premier told the lawmakers in the joint session.

He also informed the lawmakers that Pakistan was considering multiple options to challenge the decision - regarding revoking of Article 370 and 35A concerning Kashmir - and discuss it in the international court or United Nations General Assembly or United Nations Security Council.

Prime Minister Imran Khan also drew an analogy between the BJP to the Nazi party in Germany. and emphasized that Pakistan would fight this at every forum.

PM Khan added his party would travel to the West and inform them of the violations taking place in Indian occupied Kashmir as it was our job to raise this issue in the world.

Speaking briefly on his meeting with US President Trump, Prime Minister Khan said had asked the US President to intervene in the Kashmir issue with good faith.

'If the global community doesn't act now, its consequences would be grave,' the premier warned and added that the struggle in Kashmir would gain pace from now on.

Reiterating that he was not indulging in nuclear blackmailing, the premier assured that Pakistan would retaliate if India attacks it.

The premier highlighted that the Modi regime flouted international laws as well as India's constitution and its current ideology was biased.

He lavished praise on Pakistan's founding father, Quaid e Azam Muhammad Ali Jinnah and said he derived his ideology from the state of Medina.

'Those who did not believe in two-nation theory are now endorsing the ideology of Quaid e Azam,' observed the premier.

The prime minister expressed that India whipped up war hysteria for electoral gains and referred to Narendra Modi for having created the situation for victory.

Prime Minister Imran Khan also warned of a conventional war with India and said Pakistan would be left with two options in case the war goes against it.

He continued that Pakistan would either have to act like Bahadur Shah Zafar or Tipu Sultan and hastened to add that we [Pakistan] would fight till the last drop of blood like Tipu Sultan.