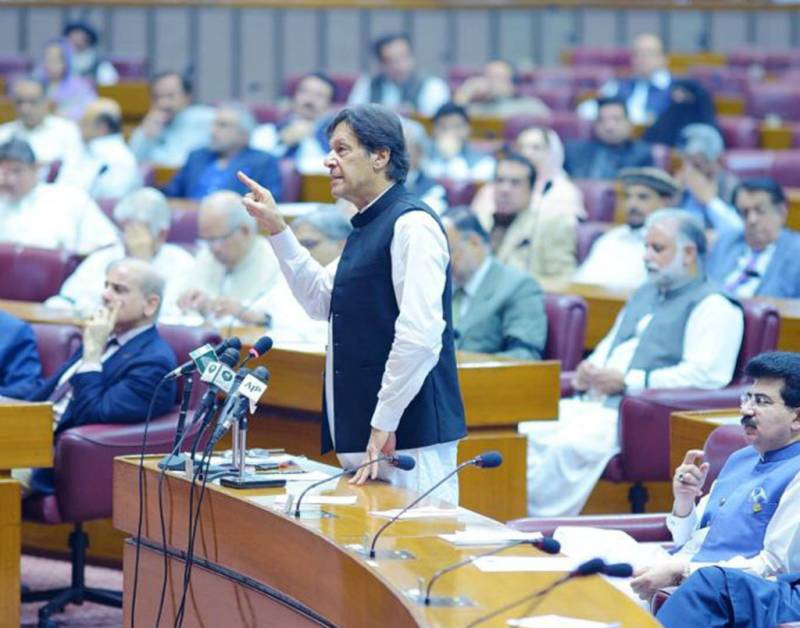 ISLAMABAD – Prime Minister Imran Khan has constituted a seven-member committee to review the political, diplomatic and legal aspects and to prepare a proposed response in view of the critical situation of Occupied Kashmir.

Earlier today, while giving a policy statement in the joint session of the parliament in Islamabad, the premier reiterated the fact that Pakistan will never accept the Indian efforts to annex the state of Kashmir.

Khan said the Indian step of revocation of Kashmir’s special status contravenes all relevant UN resolutions, India courts’ decisions and the public opinion. “The revocation of articles 370 and 35A by Indian government will further intensify the freedom struggle of Kashmiris,” he added.

ISLAMABAD – Prime Minister Imran Khan has summoned a second session of the National Security Committee within a week ...

The PM warned if the two nuclear armed neighbours fail to resolve their issues, including Kashmir, a Pulwama like trigger could drag them into a war which would not remain limited to conventional conflict.

During his first meeting with President Donald Trump, Khan had sought his mediation in resolution of Kashmir issue as he truly believes that its resolution could lead to peace, stability and prosperity in South Asia region.

Prime Minister said in the wake of recent developments in Occupied Kashmir, Pakistan is approaching all relevant international forums to raise the sensitivity and gravity of this issue.

This comes after the Delhi government revoked the region’s autonomy - under Articles 370, and 35-A of the constitution - following a massive troop build-up and the shutting of phone and internet services in the region.

Delhi's abolishment of Kashmir's special status followed accusations by Islamabad over the weekend that the Indian military had used cluster munitions over the Line of Control (LoC) separating the two countries.

The status of Kashmir has been disputed between India and Pakistan since the partition of British India in 1947. Since 1989, the Jammu and Kashmir has been in the grip of a rebellion against Indian rule, and analysts have warned the scrapping of its autonomous status could trigger fresh unrest.

Tensions remain already high between India and Pakistan, which have fought three wars over the Himalayan region, after the nuclear armed neighbours launched tit-for-tat air strikes in February following a suicide bombing claimed by Pakistan-based militants in Indian-held Kashmir.