Pakistan opposes Trump’s decision to relocate US embassy to Jerusalem 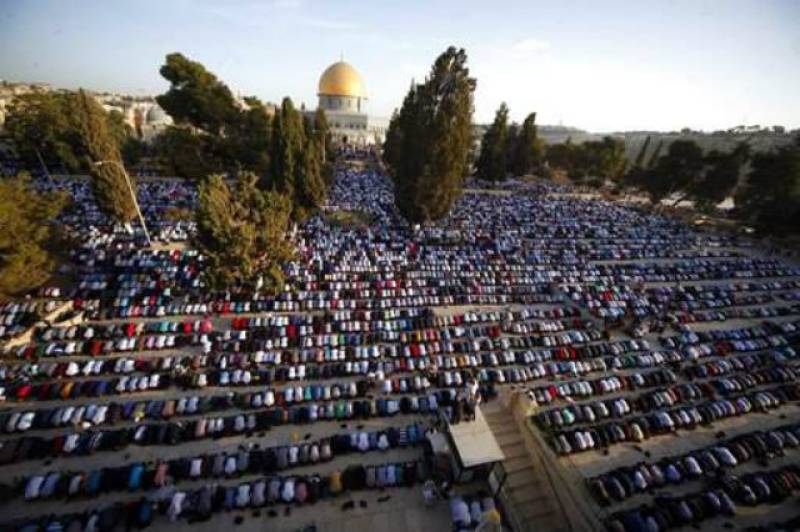 ISLAMABAD - Pakistan has joined the international community in expressing its strong opposition and condemnation at the decision of the Trump administration to recognise the occupied city of Al Quds Al Sharif, or Jerusalem, as the so-called capital of Israel and the plan to relocate its embassy there.

“It is deeply regrettable that pleas from States across the globe not to alter the legal and historical status of Al-Quds Al-Sharif have been ignored, more out of choice than necessity,” a statement from Prime Minister Office stated on Wednesday night.

“This decision represents a serious violation of international law and applicable UN Security Council resolutions, more specifically UNSCR 478. It is a serious setback to the rule of law and international norms. It signals a severe blow to the Middle East peace process as well,” the statement read.

“I have determined that it is time to officially recognize Jerusalem as the capital of Israel,” President Donald Trump said during a speech in the Diplomatic Reception Room of the White House, ordering the State Department to move the US Embassy in Tel Aviv to Jerusalem.

Trump added, “Jerusalem is not just the heart of three great religions, but it is now also the heart of one of the most successful democracies in the world.”

According to the statement from PM Office, “Pakistan shares the international outrage and is deeply concerned over the implications of this decision for international peace and security, especially in the Middle East. Pakistan calls upon the UN Security Council to take cognizance of this situation and take steps in accordance with the UN Charter.”

The statement added that Pakistan urges the United Sates to revisit its decision as soon as possible in order to avoid the potentially grave repercussions in the region and beyond.

“The Government of Pakistan welcomes the announcement by Turkey to convene an Extraordinary Islamic Summit next week to discuss this serious issue,” it further said.

ANKARA - Turkey, Jordan and the Kingdom of Saudi Arabia have expressed their grave and deep concerns over possible US ...

On Monday, the OIC had said that its 57 member states should sever ties with any state that transfers its embassy to Jerusalem or recognises Israel’s annexation of East Jerusalem.

Earlier on Wednesday, the Ministry of Foreign Affairs said “the step would constitute a clear violation of international law and UN Security Council resolutions particularly UNSCR 478 of 1980 and it would also sidestep decades of global consensus on this issue, undermine regional peace and security as well as derail any prospects for a lasting peace in the Middle East.”

Pakistan’s response to reported US move to shift its Embassy to Occupied city of Al-Quds Al-Sharif pic.twitter.com/QDFWgm3QXK

Pakistan fully “endorses the recently adopted Final Communique of the Organisation of Islamic Cooperation (OIC) on this issue”, the note added.

Meanwhile, Foreign Minister Khawaja, in a tweet, said: “By moving the embassy US will practically alter the status of Jerusalem. An affront to [Palestinians] and the Muslim world… practically burying the [two-state] solution…Will add another wound to already bleeding body of Muslim Ummah.”

By moving the embassy US will practically alter the status of Jerusalem..An affront to Palestisns and the Muslim world.. practically burying the two states solutions..Will add another wound to already bleeding body of Muslim Ummah

The international community does not recognise Israeli sovereignty over the entire city, home to sites holy to Islam, Judaism and Christianity.