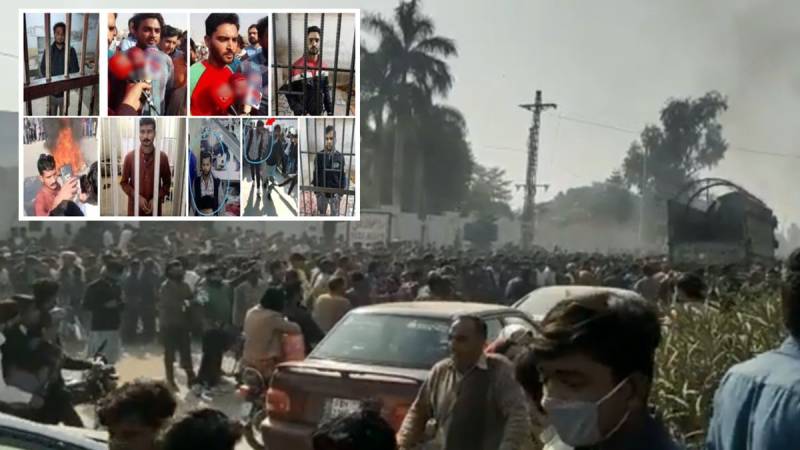 LAHORE – At least twenty-six primary suspects spotted with the help of footage in the lynching of Sri Lankan national Priyantha Kumara will be produced before an anti-terrorism court in Gujranwala today (Monday).

Reports in local media said the law enforcers will request the court for physical remand of the accused men. Around 131 individuals have been apprehended as the cops in the country’s most populous region have tightened the noose around the perpetrators by conducting raids.

Despite the weekly holiday on Sunday, 13 main suspects identified as Talha, Taimor, Shahzain, Farhan, Junaid, Abdul Ghafor, Imran, Ahmed Shehroz, Ehtesham Abdul Rahman, Shoaib, Nasir Mahmood, Rohail Amjad, and Nasir were remanded by a duty magistrate in police custody till Monday (today) when they will be produced before ATC for the lynching of Sri Lankan national Priyantha Kumara.

Reports also revealed that the main suspects were hiding at the homes of their families and friends while cops are taking help from informers and CCTV footage to nab all culprits.

A case under sections 431, 427, 149, 147, 297, 201, 302, and 7ATA has already been lodged at Ugoki Police station against unidentified people while ten investigation teams have been formed under the DPO and they are carrying out raids to arrest the accused who are being identified from the videos. Punjab Chief Minister Usman Buzdar is also overseeing the case and investigations himself.

In another development in the case, the body of Priyantha Kumara has been handed over to the Sri Lankan High Commission in Islamabad after a postmortem examination. The commission’s staff will accompany the corpse to Colombo.

Reports quoting Sri Lankan foreign ministry officials said the human remains of the victim will be flown through Sri Lankan Airlines today. Meanwhile, the officials stated that the high commission was also in discussion with the Pakistani authorities and the employer of the deceased to settle the payment of compensation.

Priyantha Kumara was the manager of a factory situated on Wazirabad Road, where the ghastly killing took place amid violent protest against the alleged blasphemy.

Prime Minister Imran Khan announced to award Tamgha-i-Shujaat to the Pakistani citizen who tried to rescue the Priyantha Diyawadana from the vigilante mob in Sialkot incl endangering his own life by physically trying to shield the victim.

Earlier, Muslim, Christian, Hindu, and Sikh leaders condemned the incident during sermons in mosques on Friday and in churches and other places of worship Sunday across Pakistan.

Terming the Sialkot incident barbaric, the leaders apologized on behalf of the nation and expressed solidarity with the people of Sri Lanka. They also demanded a speedy trial for the earliest conviction of the culprits.