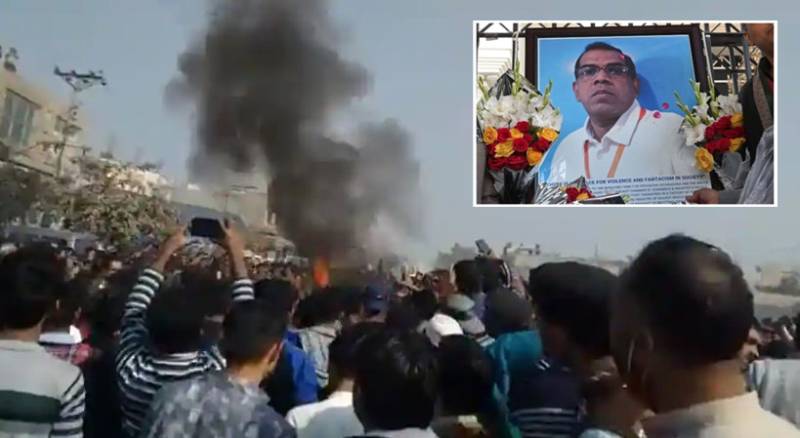 ISLAMABAD – Mortal remains of Sri Lankan factory manager Priyantha Diyawadana, who was beaten to death and set ablaze by a mob who accused him of blasphemy, to reach Sri Lanka by Monday for final rites.

A report of a local news outlet quoting the deceased’ brother, Kamala Shri Shanta Kumar, said the corpse of Priyantha will reach Sri Lanka on Monday while the final rituals will be performed on Tuesday.

Following the arrest of more than a hundred accused, the brother of the late factory manager said he was satisfied with the progress made in the murder case while the bereaved man appealed to the government of Pakistan to look after the children of the deceased.

Sharing the family ordeal, his brother said the family has not informed his mother about the heart-wrenching incident, adding that the deceased wife was also in a state of shock. Recalling the moments of his late brother, he said Priyantha used to laud Pakistan and had never complained regarding anything in the foreign country.

The courageous man also mentioned that such incidents could happen anywhere. “We still have a positive image about Pakistan,” he added and urged the authorities to take stern measures to avert such incidents in the future.

The post mortem report of the horrific killing of Priyantha Diyawadana has revealed extreme damage to his skull and other parts of the body. It showed that the man accused of blasphemy died of a severe blow to his head and most of his limb bone had been shattered before the body was ablaze.

Most of the tissues were damaged with severe burns and wounds while the body was burnt except for the lower legs.