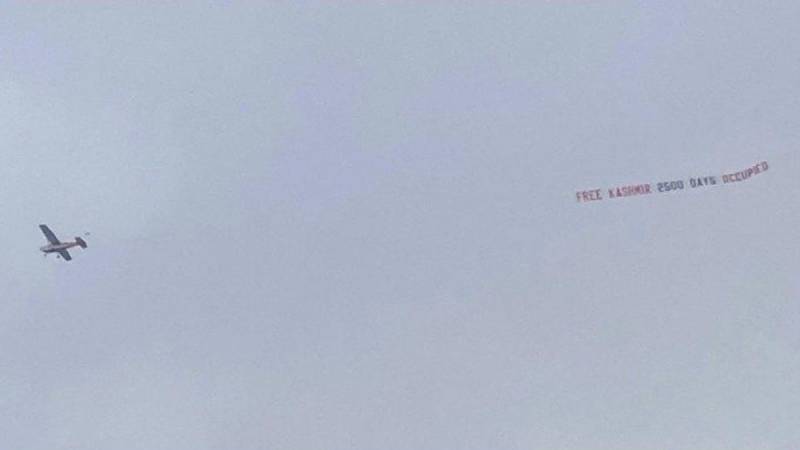 MANCHESTER – Banner reading ‘Free Kashmir - 2500 days occupied’ was flown over Trafford during a football match in the United Kingdom.

The event is not the first one as earlier banners reading ‘Justice for Kashmir’ and ‘India stop genocide & free Kashmir’ were flown over Headingley stadium during the World Cup match back in 2019.

Meanwhile, the recent event occurred during the football match between Crystal Palace and Manchester United at Old Trafford stadium in Manchester.

The incident amused the soccer fans while It is unclear as to who was flying the light aircraft and who sponsored the banner.

Earlier, the Old Trafford stadium was made a no-fly zone in wake of planes displaying Kashmir banners in Headingley.

Human rights activists have demanded that Kashmir should be united either under Pakistani rule or as an independent country as the Indian-occupied Kashmir has been gripped with violence and Indian brutality, causing the deaths of more than 70,000 civilians.

The people of Kashmir suffered unlawful arrests, brutal search and cordon operations, enforced disappearances, undocumented rapes. They have been protesting for their mandated right to freedom, as per the resolution of the UNSC.

The clampdown in illegally occupied Kashmir continued by the Modi-led government that started on August 5, 2019, continued with more brutalities than ever.  Security operations against local residents have also seen a rise.

India’s Hindu nationalist-led government has also granted tens of thousands of people from outside the region the same rights as Kashmiris, a move critics and residents say is an attempt to change the demographic makeup of the region.