Us holding constructive talks with different groups in Afghanistan: Trump

WASHINGTON - US President Donald Trump has said that his administration is holding constructive talks with groups in Afghanistan, including Taliban. Radio Pakistan reported.

In his second State of the Union address to the Congress on Wednesday morning, he said we do not know whether we will achieve an agreement, but we do know that after two decades of war, the hour has come to at least try for peace.

"We do not know whether we will achieve an agreement — but we do know that after two decades of war, the hour has come to at least try for peace," he said.

"Great nations do not fight endless wars," Trump said, after his controversial orders to pull all US troops out of Syria and half of the 14,000-strong force in Afghanistan.

He said we would be able to reduce the US troop presence and focus on counter-terrorism as it makes progress.

“And we will indeed focus on counterterrorism,” he added.

Trump made the comments while defending his plans for Afghanistan and Syria, which have met push back from Congress and the foreign policy establishment.

“As a candidate for president, I pledged a new approach. Great nations do not fight endless wars,” he said.

Trump also declared victory against the Islamic State in Iraq and Syria (ISIS) when he said in December that troops would be withdrawn from Syria. He stated that “virtually” all territory has been retaken from ISIS.

Now, as we work with our allies to destroy the remnants of ISIS, it is time to give our brave warriors in Syria a warm welcome home,” he said.

US President Trump has used the speech to urge Americans to “choose greatness”.

But he couldn’t resist a quick jab at the Democrats and Robert Mueller’s investigation into whether the Trump campaign colluded with Russia during the presidential election.

After noting America’s economy as the “envy of the world”, he attacked “ridiculous partisan investigations”.

“The only thing that can stop it are foolish wars, politics, or ridiculous partisan investigations,” he said.

Trump’s controversial push for US$5.7 billion for a border wall was a prominent part of his speech.

“Republicans and Democrats must join forces again to confront an urgent national crisis,” he said.

“The Congress has 10 days left to pass a bill that will fund our government, protect our homeland, and secure our southern border,” Trump said. 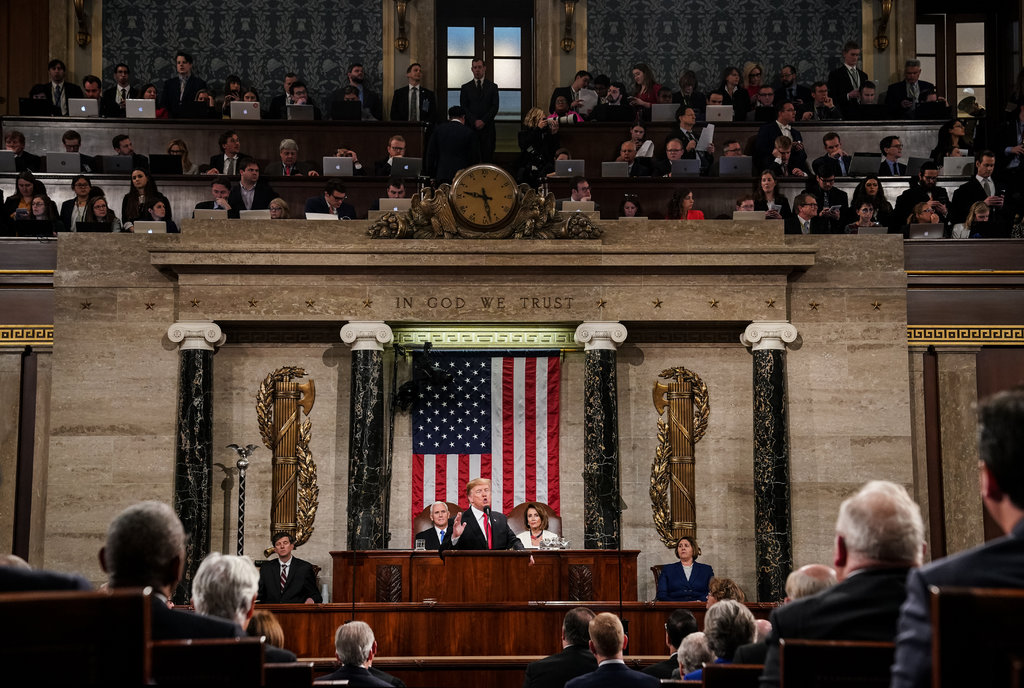 The US President said that “Now is the time for the Congress to show the world that America is committed to ending illegal immigration and putting the ruthless coyotes, cartels, drug dealers, and human traffickers out of business.”

Us President Donald Trump also announced a second summit with North Korean dictator Kim Jong-un, which will take place on February 27 and 28 in Vietnam.

“As part of a bold new diplomacy, we continue our historic push for peace on the Korean Peninsula. Our hostages have come home, nuclear testing has stopped, and there has not been a missile launch in 15 months,” he said.

Highlighting decades of “political stalemate” and “politics of revenge”, the President said it was time for Americans to make a choice.

“We must choose between greatness or gridlock, results or resistance — vision or vengeance. Incredible progress or pointless destruction,” he said.

Trump urged the US nation that “Tonight, I ask you to choose greatness”.

Trump’s opening remarks received bipartisan applause. He said America was to embark on a “bold new adventure” towards a “new standard of living for the 21st century”.