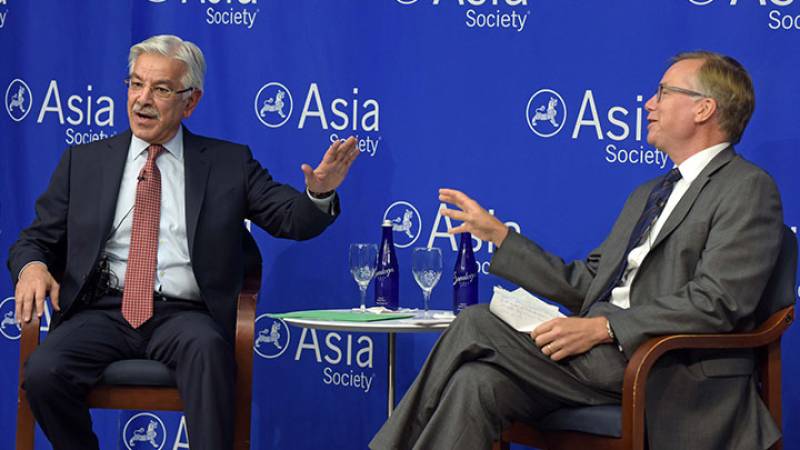 ISLAMABAD - Foreign Minister Khawaja Asif gave a scathing rejoinder to US President Donald Trump's accusations stating that Pakistan gave nothing to US against the aid provided to it, saying the South-Asian ally would no longer allow Washington to exploit the relationship.

Through a Twitter message, the Pakistan Muslim League Nawaz leader who assumed the pivotal position in August refreshed diplomatic memory asserting that Islamabad stood by US over a span of 7 decades and fulfilled commitments during the cold war.

He declared that Pakistan also threw weight behind US through 'Jihad' when it waged war in Afghanistan back in 1980.

Asif, who is considered a firebrand leader of truling party and also advocates his opinion vehemently at the international fora, stated that Pakistan also bolstered US position when it invaded Afghanistan after the 9/11 bombings, however, he mentioned that 'Americans transacted the relationship on need basis,' which would not be allowed any further.

The minister also attached a clip from his Asia Society talk delivered in September, last year, in which he highlighted that Pakistan was paying a heavy price for US intervention in Afghanistan.

A transactional relationship for US over 6/7 decades..Pakistan remained friend/ally..fulfilled commitments during the cold war..Afghan "Jihad" 80s.. Afghanistan re visit after 9/11..Americans transacted the relationship on need basis..NO MORE pic.twitter.com/ifWU7NdSBh

"A whole generation of my country doesn't even remember what was Pakistan like thirty or forty years back," Asif had said in his talk where he added that Pakistan was a liberal country back then with different sects co-existing under a peaceful atmosphere.