Is cutting US military supply lines to Afghanistan through Pakistan on the cards? 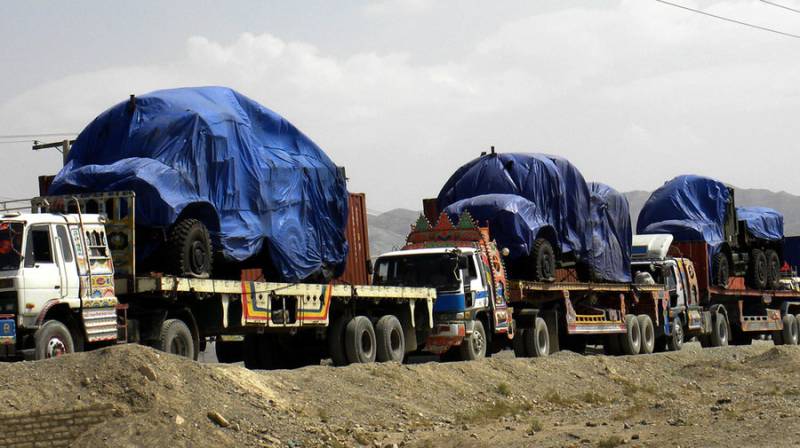 LAHORE - Since the US has started ratcheting up pressure on Pakistan through aid cuts over its alleged inaction against terrorists’ safe havens, a strong retaliation is being shown by Islamabad, calling for ending reliance on the US assistance.

Trade of heated words erupted between both countries when President Donald Trump took aim at Pakistan, which is a key supply route for US forces in Afghanistan, with the start of the new year, 2018. Trump tweeted as saying, “The United States has foolishly given Pakistan more than 33 billion dollars in aid over the last 15 years, and they have given us nothing but lies & deceit, thinking of our leaders as fools”.

After his outlandish remarks, the Trump administration withheld military assistance to Pakistan, saying it will only be restored if Islamabad takes action against the Afghan Taliban and the Haqqani Network.

In response, Pakistan’s foreign office on Friday said: “We are engaged with the US administration on the issue of security cooperation and await further details. Impact of US' decision on pursuit of common objectives is also likely to emerge more clearly in due course of time”.

Amid the row, Pakistan has different options on its cards as retaliatory measures, including suspending the supply routes for US forces in Afghanistan that runs through Pakistan. Rumours of the possible response are also doing rounds in the media; however, Islamabad has not given any official statement in this regard.

The cost-effective supply routes are essential for the US to provide assistance to soldiers fighting Washington's longest war in Afghanistan since 2001 after Trump announced that he would bring the war to its logical end while revealing South Asia policy in Afghanistan.

Trump had cleared the way for the deployment of thousands more US troops to Afghanistan, backtracking from his promise to swiftly end the war.

A senior official of Trump administration talking to international media acknowledged that US will have to face great complications if supply lines are closed. He said that the US was devising “risk mitigation plans,” adding that examination of a alternative routes from Northern side were “still at a very broad level.”

Talking to reporters on Friday at the Pentagon, US Defense Secretary Jim Mattis played down the rumours, saying, “I am not concerned” that Pakistan will suspend the supply route or airspace over halt of military aid. The defense secretary added that he had not received any such indication.

Mattis said "We're still working with Pakistan, and we would restore the aid if we see decisive movements against the terrorists -- who are as much a threat against Pakistan as they are to us."

In November 2011, Pakistan shut its land routes for Nato supply during a period of high tension when a US air strike had killed 24 Pakistani soldiers.

The US will have to bear more fuel cost if Pakistan closes the routes, which is shorter than alternative routes that run through Central Asia. Additionally, the US Air Force also have to pay for more “flying hours” on the suspension.

It is to mention here that the Parliamentary Committee on National Security met on Thursday to review the ongoing diplomatic friction between Pakistan and the US and for a response to America.

A final response of the committee would emerge after the second meeting of the parliamentary leaders next week.

Talking to media after the first meeting, NA Speaker Ayaz Sadiq said that a balanced response is needed while maintaining ties with the US.