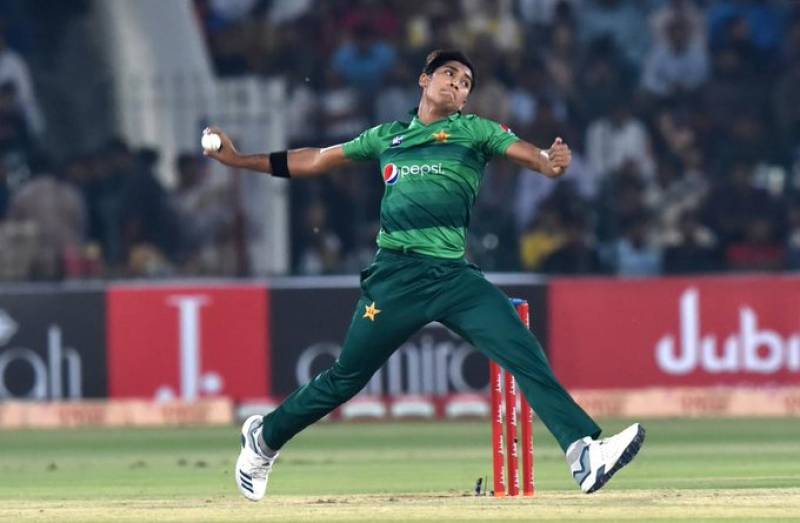 LAHORE – Pakistan fast pacer Mohammad Hasnain has become the youngest bowler to claim a T20I hat-trick after pulling off the feat across two overs against Sri Lanka yesterday.

Hasnain, playing only his second T20I, picked up the wicket of Bhanuka Rajapaksa in the 16th over, before returning to claim the wickets of captain Dasun Shanaka and Shehan Jayasuriya off the first two balls of the 19th over. The triple strike helped keep Sri Lanka to 165 in 20 overs, with Hasnain ending with figures of 3-37 from his four overs.

Honoured to become the youngest player to bag a hat-trick in the T20I cricket world. This is for the beautiful people of Pakistan and mere Ammi & Abbu. This is also dedicated to the brave team of @OfficialSLC who came to play on our grounds #PakistanZindabad #RiseAndRise #PAKvSL https://t.co/9IPh93xYVl

Hasnain sent back debutant Rajapaksa lbw off a yorker to pick up his first wicket in T20 internationals. With Sri Lanka eyeing a bump in their run-rate, he then claimed the wickets of Shanaka, who holed out to long-on, and Jayasuriya, who gave Ahmed Shehzad a catch at cover.

Hasnain’s was the ninth hat-trick in T20Is overall, and the second for a Sri Lanka bowler against Pakistan, after Faheem Ashraf’s three in three in 2017.

Before Hasnain, the youngest on the list was Afghanistan’s Rashid Khan, who at 20 years and 162 days claimed four in four against Ireland in 2018. Hasnain set the new record at 19 years and 183 days.

Hasnain’s hat-trick, however, couldn’t stop Sri Lanka from notching up a 64-run win in the first game of the three-match series. In response to the 166-run target, Pakistan were shot out for 101, with Nuwan Pradeep and Isuru Udana picking three wickets each.

LAHORE - Sri Lanka brushed aside Pakistan by 64 runs in the opener of T20I series at the Gaddafi Stadium Lahore here on ...

The next game will also be played in Lahore’s Gaddafi Stadium, on October 7 (Monday).