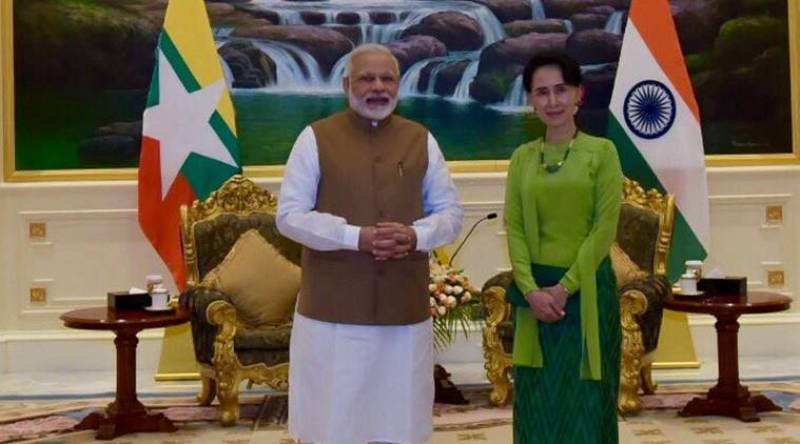 NAYPYIDAW (Capital of Myanmar) - Prime Minister Narendra Modi on Wednesday morning met Myanmar’s State Counselor Aung San Suu Kyi and said the two neighboring countries had similar security concerns and that it was important for them to work together.

Modi also spoke on development and terrorism, while announcing that India would begin giving Myamarese citizens visas free of charge.

The prime minister also addressed the situation in Myanmar's Rakhine, where a crackdown on Rohingya militants has sparked an enormous refugee crisis. "We share your concerns about extremist violence in Rakhine state and violence against security forces; how innocent lives have been affected," Modi said, standing next to Suu Kyi at a joint press briefing.

"We hope that all stakeholders together can find a way out in which unity and territorial integrity of Myanmar is respected. At the same time we can have peace, justice, dignity and democratic values for all," Modi said.

"Being neighbors, we have similar security concerns. Important for us to work together," Modi also said. Suu Kyi added, "Together we will ensure that terror is not allowed to take roots in our country, on our soil or in neighboring countries."

"We would like to contribute to Myanmar's development efforts as part of our 'Sabka saath sabka vikaas' initiative," Modi also said. Going to to talk about Suu Kyi, Modi said, "Your (Aung San Suu Kyi) courageous leadership to the Myanmar peace process needs to be lauded.

Soon after the meeting and briefing, the Ministry of External Affairs, via Twitter, announced that a number of memorandums of understanding had been signed between India and Myanmar. These included MoUs between the countries' respective election commissions and press councils.

Modi's bilateral visit to Myanmar, his first-ever, comes amid a spike in ethnic violence in the Buddhist nation's Rakhine state that has exacerbated a refugee crisis.

An army crackdown triggered by an attack on Aug. 25 by Rohingya insurgents on Myanmar security forces has led to the killing of at least 400 people and the exodus of nearly 125,000 Rohingya to neighboring Bangladesh, leading to a major humanitarian crisis.

The Indian government is also concerned about Rohingya immigrants who previously arrived in the country, and has been considering deporting them. Around 40,000 Rohingya are said to be staying illegally in India.

PM Modi is expected to raise the issue of the exodus of Rohingya into neighbouring countries during his meeting with Suu Kyi, who been criticism in some quarters for not speaking up on the humanitarian crisis.

India and Myanmar were also looking at strengthening existing cooperation in areas of security and counter-terrorism, trade and investment, infrastructure and energy, and culture, Modi had said ahead of his visit.

Modi arrived here on the second leg of his two-nation trip during which he travelled to southeastern Chinese city Xiamen where he attended the annual BRICS summit and held talks with Chinese President Xi Jinping, Russian President Vladimir Putin and other world leaders.

This is Modi's first bilateral visit to Myanmar. He had visited the country in 2014 to attend the ASEAN-India Summit. The Myanmarese president and Suu Kyi had visited India last year.

Myanmar is one of India's strategic neighbours and shares a 1,640-km-long border with a number of northeastern states including militancy-hit Nagaland and Manipur.-Agencies