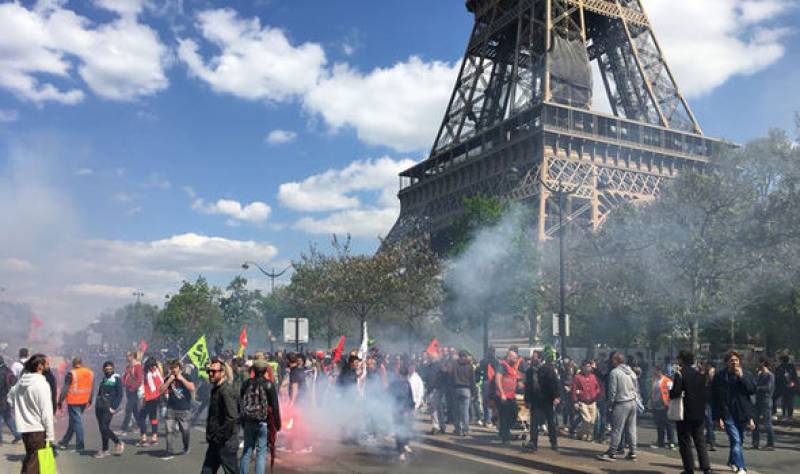 PARIS - Amid fears of more intensive anti-government protests over the hike in fuel prices, France has decided to close the landmarks including the Eiffel Tower, the prominent tourist place, on Saturday.

Thousands of police officers have been mobilized to tighten the security to prevent another outbreak of violence that has crippled the country for three weeks.

"According to the information we have, some radicalized and rebellious people will try to get mobilized tomorrow," Interior minister Christophe Castaner told a presser on Friday. "Some ultra-violent people want to take part."

Authorities say 8,000 personnel will be deployed in streets of Paris, who will be equipped with a dozen barricade-busting armoured vehicles that could be used for the first time in a French urban area since 2005.

Fearing violent agitation could damage the public and private property, Paris police will remove all glass containers and machinery in different areas.

Due to the protests, the authorities have also cancelled matches of French league football this weekend across the country.

Across the country, the strength of the police has been increased to 89,000 from 65,000 deployed last weekend when over 130 people were injured and more than 400 were detained in the worst violent protests in decades.

As many as four people have lost their lives since the unrest began after the government revised upward the diesel taxes on November 17.

The protesters are collectively referre3d to as the “yellow vest” movement, in reference to the fluorescent safety outfit French motorists keep in their cars.

In addition to the closure of the Eiffel Tower, many shopping plazas across the country, including the Louvre, Orsay Museum and the Grand Palais, will remain closed on Saturday for safety reasons.

The Eiffel Tower is 324 m (1,063 ft) tall. When it was built it was the tallest man-made structure in the world – a title it held for 41 years. The tower first opened on 31 March 1889, as part of a centennial celebration of the French Revolution.

The Eiffel Tower is one of  Paris's most visited attractions, which is visited by almost seven million tourists per year.