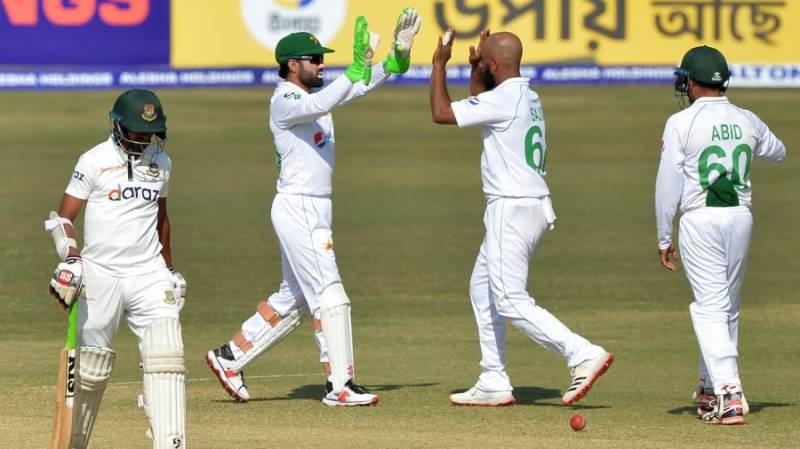 DHAKA – Right-arm spinner Sajid Khan was on song with his bowling attack as visitors reduced tigers to 76-7 in the first innings on Day 4 of the second Test at Shere Bangla Stadium.

Khan’s maiden six-wicket haul put Men in Green in the driving seat. After declaring at 300-4, the Babar-led squad got rid of Bangladesh's top order on the fourth day of the rain-hit second Test.

Earlier today, the play was called off at 4.30 pm, an hour before the scheduled close as conditions continued to remain cloudy all day. Yet, it was better than on the three previous days where continuous downpour allowed just 63.2 overs to be bowled in the Test.

Khan provided early breakthroughs to send Bangladesh to Tea at 22-3. Following the break, he continued his form and kept on taking wickets.

On the other side, Najmul Hossain Shanto remained top-scorer with 30 runs off 50 balls including three boundaries, Shakib-al-Hasan remained not out for 23.

Resuming Day 4 at 188-2 after rain spoiled two days of the game, Pakistani opening batters Azhar Ali and Babar Azam failed to impress. Azhar walked off after scoring 56 off 144 balls including eight boundaries while the skipper scored 76 before he got out to Khaled Ahmed.

Fawad and Rizwan then scored 103 runs for the fifth wicket. Fawad remained not out for 50 laced with seven boundaries whereas Rizwan scored 53 off 94 spread over four boundaries and a six.

For the hosts, leg arm spinner Tajiul Islam got two wickets while Khaled and Ebadot Hussain shared a wicket apiece.

A day earlier, Pakistan had reached 242-4 in their first innings at lunch on the fourth day with Rizwan -- who survived two reviews -- batting on 26 and Alam 19.

Shaheens lead the two-Test series 1-0 after an eight-wicket win in Chittagong.

DHAKA – Pakistan, and Bangladesh were left kicking their heels after playing just 6 over after downpour hamper ...