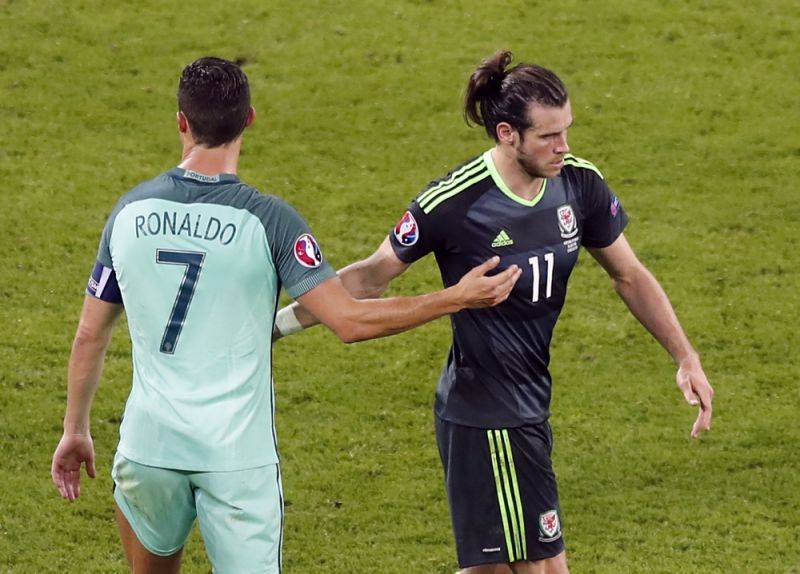 LYON - Cristiano Ronaldo made European Championship history as Portugal ended Wales' extraordinary Euro 2016 journey with a 2-0 semi-final win on Wednesday, launching themselves into the final.

In what was billed as a shootout between Ronaldo and his Real Madrid team-mate Gareth Bale,  the Portugal captain prevailed and opened the scoring in Lyon with a majestic 50th-minute header that saw him tie France great Michel Platini's record of nine goals at the Euro finals.

He also teed up Nani for Portugal's second goal three minutes before consoling his club colleague Bale on the pitch at the end of the tie.

Fernando Santos' men now march towards a Sunday showdown at the Stade de France with either Germany or hosts France, who meet in Marseille on Thursday.

It will be only Portugal's second major final after Euro 2004, when a 19-year-old Ronaldo was left in tears on the Estadio da Luz pitch in Lisbon after the hosts were beaten 1-0 by Greece.

While Ronaldo - whose three goals leave him one short of tournament top scorer Antoine Griezmann from France - closes in on what would be his first international trophy, Bale and Wales' dreams of emulating 2004 Euro Cup-winning Greece ultimately came up short.

Missing the suspended Aaron Ramsey, they failed to trouble a Portugal team that had not previously won inside 90 minutes at the tournament.

But Chris Coleman's side and their redoubtable red-shirted fans leave France with their reputation immeasurably enhanced, having reached the last four for the first time in a major competition since the 1958 World Cup,.

West Ham United defender James Collins got the nod for Wales in place of the suspended Ben Davies and he coped manfully with the threat posed by Ronaldo in the first half, although he was perhaps fortunate to escape censure for a penalty-box headlock on the Portugal captain.

Ronaldo had to wait until the 44th minute until his first sight of goal, heading over from Adrien Silva's inswinging left-flank cross, while Joao Mario dragged a shot across goal and wide.

With Ramsey absent, there was even more onus than usual on Bale to make things happen for Wales and he was the stand-out player in an otherwise flat first period.

From Joe Ledley's training-ground corner he swiped a shot into the stands, while a galloping run down the right wing culminated in a shot that flew straight into Rui Patricio's gloves.

But if the first half was all about Bale, the second was all about Ronaldo. A short corner on Portugal's left yielded the opening goal five minutes after the restart.

Raphael Guerreiro curled a cross to the back post and Ronaldo leapt above James Chester, seeming to hang in the air, before powering a header past Wales goalkeeper Wayne Hennessey's flailing left hand.

Previously, Wales had taken control of the game after falling behind to Belgium in the quarter-finals, ultimately winning 3-1, but Portugal gave them no chance of doing that by scoring a second goal within three minutes.

Ronaldo was the provider this time, albeit inadvertently, as his mishit shot was prodded into the net by his former Manchester United team-mate Nani.

Bale twice worked Rui Patricio with swerving efforts from range, but Portugal remained a threat, with Nani, Jose Fonte and Danilo all testing Hennessey. By the end Wales's fire had burnt itself out, but their fans continued to sing as the seconds ticked away on their unforgettable French adventure.