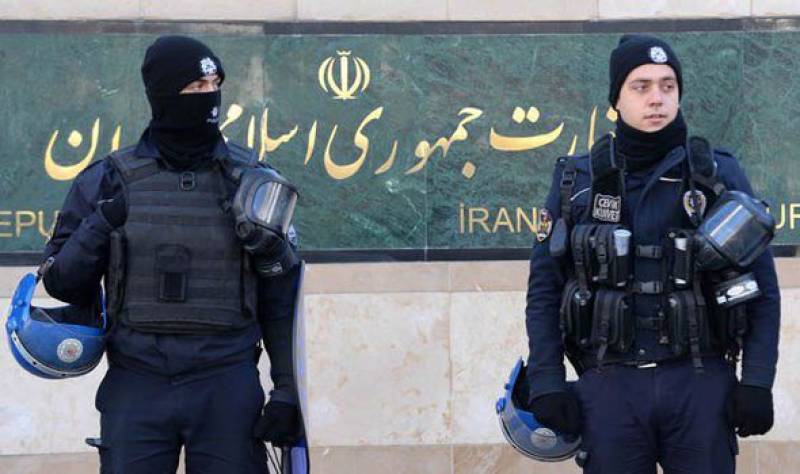 TEHRAN - Seventeen people were killed while 52 others were injured in a series of attacks with one targeting Iran's parliament and the other one at Imam Khomeini Mausoleum on Wednesday.

Media reports emerging out of Tehran suggest that two attacks happened in Iran. The first one relates to an armed man who entered the western entrance of the mausoleum and opened fire before blowing himself up with a suicide vest.

One person was also killed however, it was not sure whether he was the suicide bomber himself, reported ISNA news agency.

On the other hand, Fars news agency gave a different view and claimed that four unidentified armed assailants started a shooting spree at Imam Khomeini's shrine.

Three of the assailants shot tens of rounds at the people visiting the shrine, while the fourth one detonated himself in a suicide attack in front of a police station opposite the shrine.

Reportedly, the suicide attacker was a female. The law enforcement and guards at the shrine said they have also defused another suicide vest at the scene.

Pirhossein Kolivand, the head of Iran's emergency department, was quoted by Mizan Online, an Iranian state-run news website, as saying that 12 people were killed and 42 wounded in the two attacks.

In another incident, an assailant opened his way into the parliament building while shooting at the guards, leading to the injury of one of the IRGC guards and six civilians.

However, there were mixed reports, with some local news agencies reporting there was a single shooter inside the Tehran parliamentary complex and others saying there were three men armed with rifles and a pistol.

The Tasnim news agency said that the identity and motivation of the assailant was still unclear and reports are rife that the shooting was still on and several people were held hostage inside the parliament building.

Contradictory reports are coming from the parliament as one of the deputies said the assailants were three and have been trapped in the offices of the deputies.

Interior Minister Abdol Rahman Fazli confirmed that he had convened a special meeting of the country’s security council in the wake of terror attacks.

The notorious ISIS claimed responsibility for twin attacks at the Iranian parliament and the tomb of Ayatollah Khomeini in Tehran, in what would be the first time it has carried out a major terror operation on Iranian soil.

The militant group announced the development through its Amaq news agency.

In support of the claim, Amaq Agency published a mobile video recorded by the assailant himself who could be heard yelling in Arabic with a Persian dialect: “Do you ever think we (red. ISIS) will leave? We are here to stay, with Allah’s permission.”

Independent social media buffs and journalists with a wide-spread knowledge of changing situation in Iran give a different view of the scenario that could baffle the outsiders.

In a series of Tweets, award-winning journalist Naveed Ahmad described the whole Iran episode suggesting that the attack in Iran's parliament could be inside job as it was heavily guarded.

#Iran’s #Majlis or #Parliament is normally heavily secured. Attack not possible either sans inner help or by insiders themselves involved.

Naveed, detailed that no official figure was available regarding the casualties however they ranged between 2 nd 20.

#Iran: The number of reported dead varies between 2 and 20 according to #socialmedia user in #Tehran. High risk state. First of its kind

No militant group including ISIS or al-Qaeda has claimed responsibility for the deadly attacks that apparently look coordinated.

In ongoing #Iran-initiated hybrid war, anyone can claim to be #ISIS, #alQaeda for media. #Dabiq, other estab mouthpieces mum so far. #terror

According to the journalist, Iran recruited mercenaries to safeguards shrines in Syria and Iraq however, the mausoleum of Khomeini inside its own territory was not safe.

#RealityCheck that #Iran that recruits mercenaries to protect shrines in #Syria, #Iraq has to see #Khomeini’s tomb echoing with gunshots. https://t.co/JpQ0WgGSVg

He also divulged Iran's policy of downplaying the incident and fudging the figures.

Not only the media coverage was restricted, social media users were also gagged by suspending cellular service however it was expected that videos related to the incident would surface due to tech-savvy youth in Muslim state.

Congratulations! Mobile phone services shut down in #Iran to restrict #socialmedia leaks. Foreign #media must wait for official word only.

Naveed observed that the Parliament of Iran was toothless and it rarely went mainstream on global media.

#Iran’s toothless parliament’s rarely made global headline since 1979. It’s like any other parliament in the #MiddleEast. MPs tweet selfies

Iran's Fars agency initially pointed fingers at ISIS for wreaking havoc in capital however, it took back the allegations after some time.

The journalist extensively covering the developments unfolding in Pakistan's neighbourhood also reported that IRGC (Islamic Revolutionary Guard Corps) has mobilised troops around key installations across the country, especially Tehran which has been epic centre of today’s terror attacks.

It bears mentioning that at Iraq's city Mosul, both Iran and ISIS are in a conflict and according to disputed claims, the attack could be a staged one to pave way for oustering Hassan Rouhani.

An #Iran-ian friend in California does not buy it to be a genuine attack.
He calls it an #IRGC coup against second-term president #Rouhani.