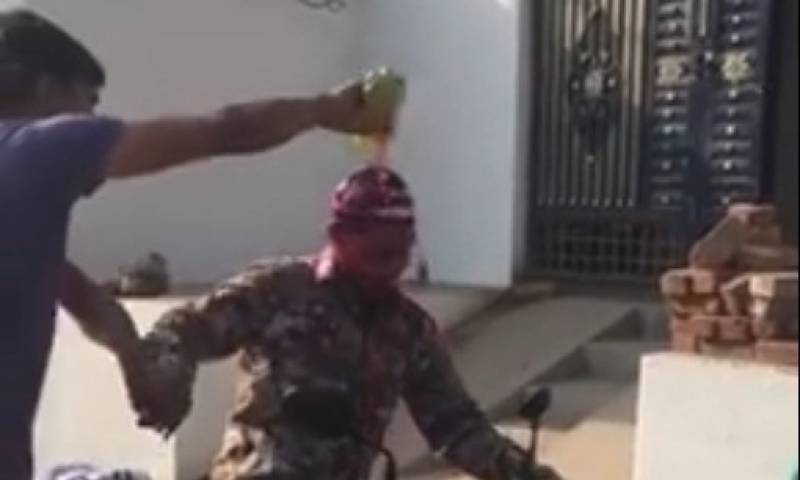 NEW DELHI – Holi, a festival of colours in Hindu religion, is being forcefully imposed on Muslim segment of India where passers-by were drenched in colours without their consent.

The violence, which was observed in streets of the 'so-called' liberal country, was not able to grab the attention of India's local media.

Several video clips regarding 'Holi harassment' were shared on Facebook in which people belonging to the Muslim community were smeared with colours.

In a video, some Hindu extremist threw colour on a white-bearded man, aged around 60, without his permission. The accused can be heard saying, Happy Holi, after attacking the old man, which was unable to show resistance in Hindu majority country.

Other videos show people were going along with women on bike and car when they came under attack of colours.

It is unclear whether the suspect, who can be seen in the video, has been arrested.

Social media users expressed anger over the incident and demanded action against the suspects.

The harassment came after college girls were attacked with semen-filled ballons in the guise of Holi in New Delhi.

NEW DELHI – The Hindu festival of Holi is supposed to be the event of colours when people play and laugh together, ...

A student of Lady Sri Ram College, New Delhi, took to social media and shared a story of coming under an attack of semen-filled balloons in the guise of Holi celebrations.

On this event, people throw colorful water even on unknown passersby, chanting a phrase "Bura Na Mano Holi Hai", but the girls were angry after they discovered the liquid to semen.

Unveiling the hooliganism, a student shared her story on Instagram stating, "I went out with a friend for lunch to a cafe in Amar Colony Market. At around five when heading back in a rickshaw there came flying my way a liquid-filled balloon hitting me in the hip where it burst open, its content seeping into my dress.

"It dried white on my black leggings... I did not guess what it really was. Only when I returned to my hostel to hear another friend of mine talking about semen-flinging," she said.

"Not a single person in that busy market batted a single eyelid at the sight of men throwing such balloons," she said in the post.

The student added, "Ever since in moved to this city seven months ago, I've been bumped by more than once by men."

She further wrote, "‘Honey’, ‘Maal’, ‘Momo’, ‘China’, ‘Item’. Just some endearing nicknames that I go by nowadays. Go ahead. Scream ‘Chinese’ at me from across the street and run off. I won’t even get more than mildly annoyed. I’m so used to it now. ‘Chinky girls are easy’. I wonder where my ‘FAULT’ lies really. In being born a girl, or in being from the North-East. I’m not the first person to be going through these things. I’m just one of many. But do you see things from my perspective just a little better now?"

The girls later also staged protests against the harrasment on this festival.