EVERYDAY IS A NEW DAY: A girl who wakes up with no memory of yesterday 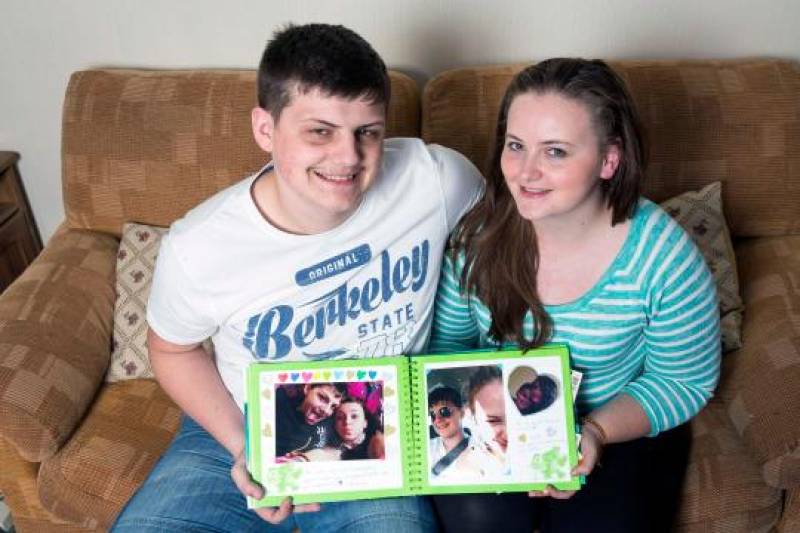 While Drew Barrymore’s character in 50 First Dates is fictional, it turns out that the memory condition that caused her to forget everything each morning is not.

Like Drew’s character Lucy Whitmore, Jenny Gisby, who lives in Nottingham, England, suffers from short-term memory loss to the extent that she wakes up each morning without a clue what took place the day before.

And just like in the movie, Jenny has her own Henry Roth/Adam Sandler, a patient boyfriend who wants to help her remember through a scrapbook that chronicles the couple’s intimate moments. “I will wake up after being asleep all night with no memory of who I am or my boyfriend and parents,” Jenny told the Caters News Agency in the UK. “I feel so angry at first as I think everyone around me is a complete stranger.”

Commenting on boyfriend Stuart Balmforth’s scrapbook, Jenny said, “It is lovely being able to witness all mine and Stuart’s memories again, it’s like I’m falling in love with him all over again.” It all started last year when Jenny collapsed at work and landed in a coma for a few days. When she woke up, she suffered from a severe seizure, which caused her to become paralyzed. Doctors have diagnosed Jenny with a combination of Functional Neurological Disorder (FND) and epilepsy — two conditions that contribute to her memory loss. Neuropsychologist William B. Barr tells Yahoo! Health that FND is nothing new. “There’s often some kind of stress in the person’s life, and this is usually seen in individuals who have underlying psychiatric conditions. So it is generally understood as an expression of an underlying psychological condition that comes out in a physical way.”

He further explains that this condition can manifest in many forms, including paralysis, difficulty speaking, abnormal body movements and seizures, which are the most common. “This is something we see in our office all the time. And these people have terribly disruptive lives as a result.” Barr adds that the treatment for FND entails focusing on the psychological or psychiatric condition, rather than treatment of the symptoms. He added that recovery is certainly possible, but would take a long time and would require substantial support from family and friends. Jenny is hoping her story will help others who are also dealing with this disorder. “I couldn’t ask for more support from my family and boyfriend, they have all been amazing and I rely on them so much now.”