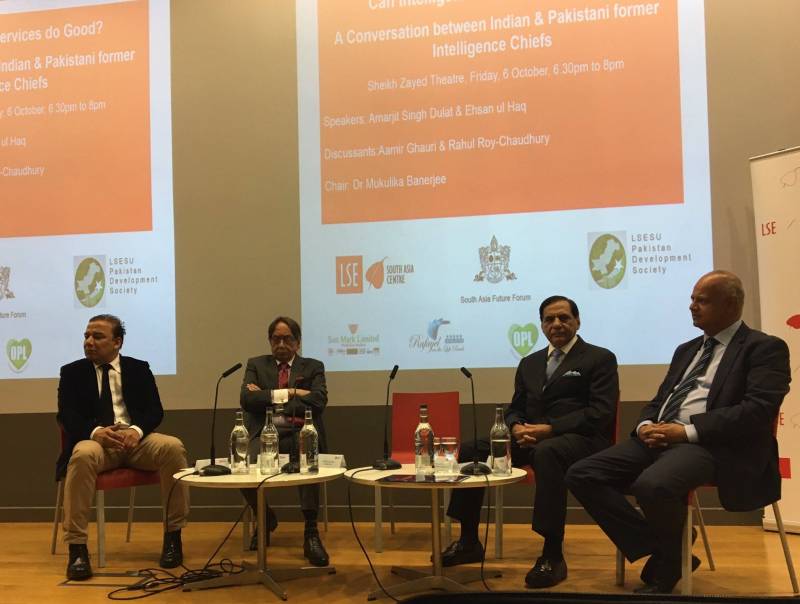 LONDON - In the first-ever public debate of its kind, the former spy chiefs of Pakistan's top spy agency Inter-Services Intelligence (ISI) and Indian Research and Analysis Wing (RAW) sat together on Friday for an event titled 'Spymasters Speak'.

The discussion was held in the packed Sheikh Zayed Theatre of the London School of Economics, where General (r) Ehsan ul Haq and Amarjit Singh Dulat talked about the challenges, limits and potential faced by spy agencies when it came to domestic and international security issues.

The gathering, arranged by South Asia Future Forum, was one of its kind for both countries which are deeply entrenched in long-standing rivalries, starting from the Kashmir conflict to the most recent episode involving Kulbhushan Jadhav.

Starting off the debate, General Ehsan stated that the Jammu & Kashmir dispute continued to haunt India-Pak relations, highlighting that terrorism was an issue that further strained the relationship between the two countries.

He said that the relations between Indian and Pakistan had deteriorated after the latest uprising in the restive valley, referring to the martyrdom of Hizbul Mujahideen commander Burhan Wani, but hastened to add that the rebellion was to be expected as the Kashmir issue could not be washed away.

Ehsan also condemned the use of pellet guns in the valley, declaring that Kashmiris were living in a highly militarised zone.

"After many years, the tension in Kashmir has escalated Indo-Pak acrimony," said the Pakistani representative.

He continued that the Indian bid to pacify the region did not prove successful, as a politico-humanitarian approach could solve the crisis.

The former ISI boss clarified that Pakistan was ready to fully cooperate on the issue of terrorism, and discuss ways to solve the problem.

The retired military men categorically made it clear that Pakistan was concerned about Indian-sponsored terrorism in Balochistan.

"The Kulbhushan Jadhav case provides irrefutable evidence of India’s involvement in Baluchistan," he observed and accused India of not cooperating with Pakistan over the issue of Samjhota Express tragedy which left many Pakistanis dead.

Gen Haq said that war was not an option, and both countries should move meaningfully toward dispute resolution.

He noted that one should not hope for any breakthrough under Narendra Modi's government as he had employed harsh rhetoric which does not bode well in the current circumstances.

General Haq said that the intelligence cooperation must continue to work even if there is a breakdown at the diplomatic and political levels.

"Cooperation between agencies is the last resort for preventing & pre-empting crises. Unfortunately, that has not been the case in South Asia," he added.

After he concluded his discussion and fully presented Pakistan's case, his Indian counterpart was invited to address the allegations and express his viewpoint.

Amarjit Singh Dulat kicked off his speech by taking up the Kashmir issue first, saying that for the last 15 months Kashmir was never mentioned by Pakistan.

He noted that heavy-handedness never worked in Kashmir, and that this approach did not prove successful even in Spain.

"Pakistan has long gone out of the Kashmir equation, and the Kashmiris realise there is nothing more to be gained from Pakistan," he claimed.

The Indian representative clarified that Kashmir was a part of India.

"We need to deal with Kashmir in a more civilised manner," he indicated, adding that Article 370, which grants special autonomous status to the state of Jammu and Kashmir, was "not going anywhere".

He cited "the communication gap" as the main reason behind the strained relations between the two states, while stating that even during the cold war the CIA (US spy agency) and the KGB ( Soviet Union's spy agency) never stopped talking.

"Communication saved the world from a possible world war, so there is no reason why Pakistan and India cannot cooperate," he said.

He mentioned that there was a great need to look at the bigger picture and visualise the future instead of simply "spot-healing" the current crisis.

In response to a question about the possibility of cricket diplomacy between the Asian neighbours, Dulat stated that cricket should be played between the two countries, and that it had been halted due to the security situation.

His Pakistani counterpart expressed the opinion that cricket was a symptomatic issue, and a change in mindset was needed between the two competitors.

The participants including Rahul Roy Chaudhry, senior fellow for South-Asia, and seasoned journalist Aamir Ghauri, and the chairperson Dr Mukulika Banerjee, Director South Asia Centre, all shared their views for devising solutions to the problems faced by the neighbours.

He said, "We live in a post 9/11 world with different rules of engagement and estrangement, and the new hardline approach was 'you are either with us or against us'."

Roy Chaudhry stated, "The world’s best intelligence agencies have worked with ISI in the past but Indian agency RAW did not have such relations."

He further claimed, "ISI is very powerful with a strong mandate on foreign policy and security, and RAW doesn’t have the power that the ISI has."

The discussion had the potential to turn heated, owing to contentious issues such as the Kulbhushan case and regional threats to Pakistan. However, it turned out to be a polite and meaningful discussion, where the participants remained very civil, keeping the audience highly engaged and impressed.