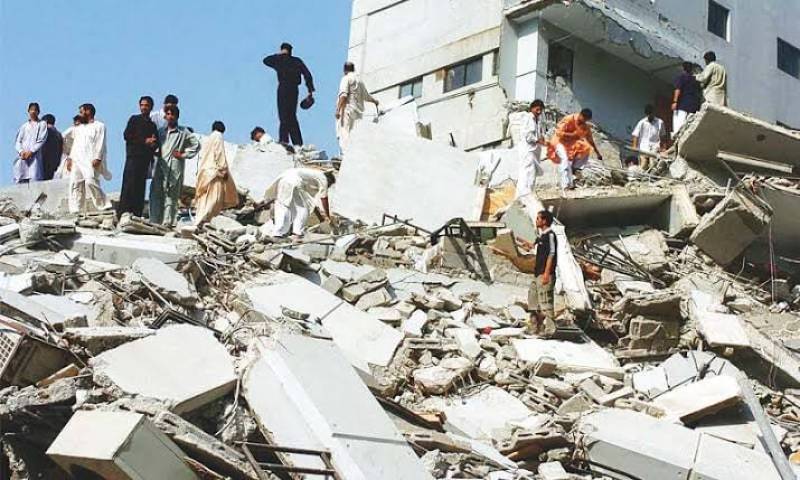 MIRPUR - A walk of the children dwelling Kashmir Orphan Relief Trust (KORT) and Educational Complex in Mirpur, who had fallen shelterless in deadly earthquake of October 8, 2005 in Azad Jammu Kashmir, will be the hallmark of the 14th Anniversary of history’s worst catastrophe to be commemorated in this district simultaneously with rest of AJK on Tuesday.

The walk will begin at 7.00 am on Tuesday from Quaid-e-Azam International Sports Stadium to central Shaheed chowk in the city to mark of the anniversary, said Ch. Akhter, the founder of the KORT, the largest shelter home in South Asia, housing over 400 of orphan and shelterless children – mostly those who were rendered homeless and orphan following the killer earthquake of October 2005 in Muzaffarabad and various adjoin parts of AJK and KPK.

Talking to APP here on Monday, Akhtar said that a grand ceremony to pay glowing tributes to the victims of the history's worst catastrophe will be held at the KORT complex at Akhterabad in the same evening (Tuesday) where people where dignitaries - besides social workers, volunteers and heads of various nation-building institutions will attend to observe the anniversary with due respect and prayers for the victims of the devastating calamity.

At the same time, arrangements have been given final touches in Azad Jammu Kashmir to observe the 14th Anniversary of history’s worst killer earthquake of October 8, 2005, in the district simultaneously with rest of Azad Jammu & Kashmir on Tuesday - October 8 with due feelings of seriousness, respect and determination as the National Disaster Awareness Day with the glowing tributes to be paid to the martyrs and other victims of the history’s first-ever most-worst deadly catastrophe in the region.

This year Mirpur city of AJK will observe the anniversary when it met the same fate in form of September 24 devastating quake of moderate magnitude measuring 5.8 at Richter scale that left at least 39 people dead and over 800 injured besides huge damaging of the buildings across Mirpur city and adjoining areas of Jatlaan leaving hundreds of thousands of the people shelterless badly affecting the daily life.

The anniversary will be observed as the national day of awareness about safety from the national disasters to mark the 14th anniversary the calamity as ‘day of firmness and determination for reconstruction – in memory of earthquake martyrs’ coupled with special prayers for the rest of the departed souls of the quake victims in eternal peace and to express complete solidarity and sympathies with the survivors of the history’s most worst natural catastrophe.

The day will dawn with special prayers in the mosques at Fajr across AJK for the departed souls of the earthquake victims. It will be a gazetted holiday throughout AJK State.

Major ceremony to mark the day will be held at the capital city of Muzaffarabad, with the sign of deep-rooted love and affection by the government and the people of Pakistan as well as the national and international NGO’s and brotherly foreign countries who contributed their exceptional share for the rebuilding and rehabilitation of the quake-hit zone of AJK, the State National Disaster Management Authorities sources APP on Monday.

Besides, special functions in various parts of AJK to pay glorious tributes to the victims of the killer catastrophe and to raise awareness among the people about adoption of per-cautionary measures to avert the losses in case of any natural catastrophe, will be the hallmark of the 11th anniversary of the deadly earthquake which had turned bulk of AJK into rubble this day 14 years ago”, the sources added.

In Mirpur, the major ceremony will be held where fateha Khawani will be offered for the martyrs and simultaneously with rest of the country sirens were blown at 8.52 a.m and two minutes silence will be observed in the mourning of the victims of the catastrophe at a ceremony to be started at Quaid-e-Azam Cricket Stadium in the morning of October 8, local authorities said when contacted here on Sunday to inquire about the programs of the anniversary of deadly catastrophe in all three districts of Mirpur division including Mirpur, Kotli and Bhimbher districts.

Concerned district authorities in all three districts of Mirpur division have given final touches to the programs of the anniversary in the division.

Several of the mega Development Projects of public welfare have been completed in the AJK capital in the wake of the broad-based phased plan to rehabilitate the AJK metropolis on latest grounds comprising modern civic and other infrastructural facilities.

Similar special ceremonies including walks for awareness, seminars and symposiums will also be held in all other parts of AJK in the memory of the martyrs of the devastating quake which left over 75 thousand people dead and lakhs of others injured in Khyber Pakhtunkhwa and Azad Jammu & Kashmir.

The ceremonies will be attended by the people representing all walks of life including social and political workers, lawyers, journalists and members of the business fraternity to pay glorious tributes to the victims of history’s worst catastrophe this day 14 years ago in 2005.