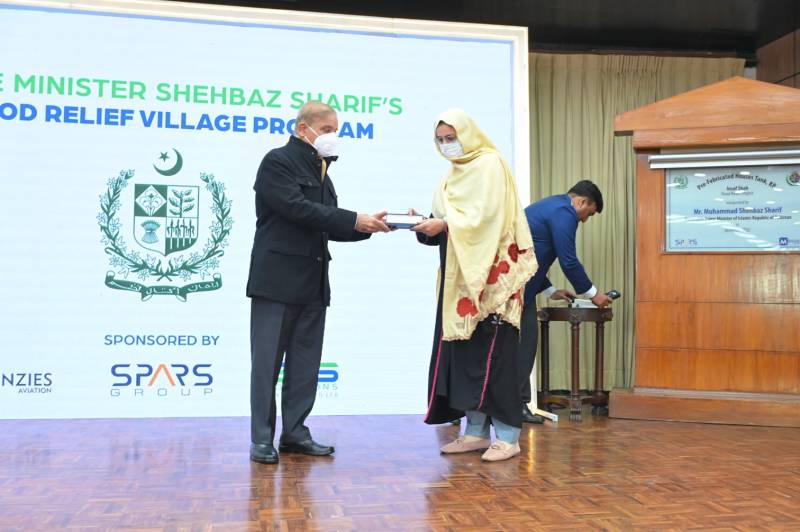 ISLAMABAD – Prime Minister Shehbaz Sharif on Thursday distributed keys of the newly built residential units among the flood affectless of the northwestern Pakistan.

Addressing the inaugural ceremony of the government’s housing project, the premier appealed to humanitarians, expatriates, and global donors to help the government to replicate the model of building prefabricated houses for flood victims.

The prime minister mentioned that the federal government was doing all-out efforts to give shelter to those who have been displaced by massive flooding and urged the well-off people to adopt flood-hit people of Balochistan and Sindh by providing them the infrastructure equipped with basic amenities.

Sharing numbers during his address, the premier said that nearly two million houses have been completely or partially affected after this year’s deluges that killed around 1,700.  He further continued that besides the residences, the agriculture sector was also very affected where crops were destroyed.

Sindh remains the worst hit area, PM said, sharing the horrific scenes in the southeastern part. He mentioned that around Rs70 billion were disbursed by the federal government to the flood affectees through Benazir Income Support Program.

He further commended friendly countries including Qatar, UAE, and Turkiye who helped Pakistan like brothers as the country faced the worst floods in recent memory and lauded army officers and soldiers who sacrificed their lives during relief works of floods in Lasbela, saying the nation will always remember their sacrifices.