Over 500,000 people visit Sharjah Pavillion in a 9-day event 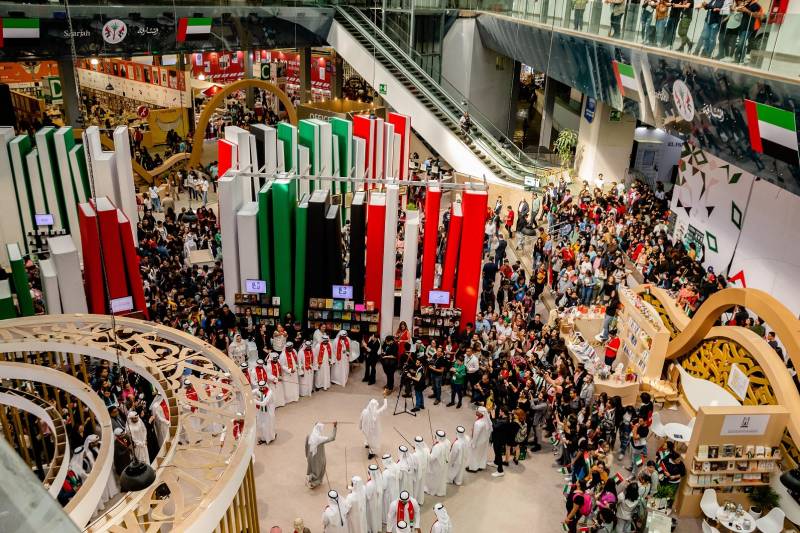 GUADALAJARA - Over the course of nine days, Sharjah turned the Guadalajara International Book Fair (FIL) into a global celebration of Emirati and Arab culture. While participating as the Guest of Honour at the 36th edition of the fair, the UAE flag was displayed along the exhibition pavilions and walls with the names and pictures of Emirati and Arab authors, creators, and artists on billboards around FIL 2022.

The emirate's Guest of Honour Pavilion at the entrance of Expo Guadalajara welcomed more than 500,000 visitors out of the 850,000 that explored the book fair. Visitors queued to have their names written in Arabic, and took part in the diverse cultural programme, including workshops, panel discussions, and music performances, with eager attendees lined up to try on traditional Emirati clothes as well as learn more about embroidery techniques, weaving, henna arts and making incense. 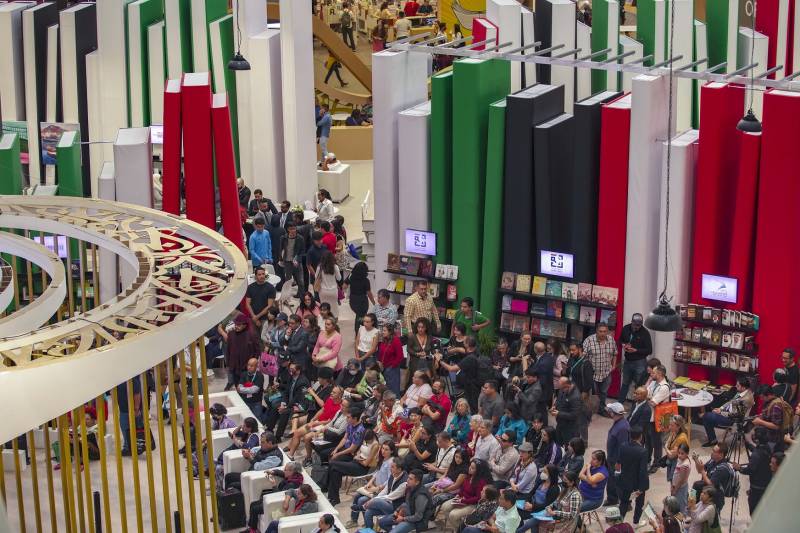 The distinguished Emirati authors' books which were translated into Spanish by the Sharjah Book Authority, were a massive hit during the bookfair, which was evident in the sale of 4,500 copies over the nine-day event, with the highest demand for the books authored by His Highness Sheikh Dr Sultan bin Mohammed AlQasimi, Member of the Supreme Council and Ruler of Sharjah. These included acclaimed titles such as ‘The Inquisition Documents of Crimes against More than Half a Million Muslims in Andalusia’ and ‘I Condemn’.

As part of Sharjah’s cultural offerings, they promoted the Emirati and Arab film industry through the screening of the film ‘Khorfakkan’, in two of the biggest cinemas in Guadalajara. The film which had Spanish subtitles received rave reviews from Mexican media, and tickets were completely sold out during its premiere.

Visitors, young and old, were enthralled by the Sharjah Guest of Honour Pavilion, which was designed as a row of gigantic books coloured with the UAE's national flag colours. The tour inside the pavilion encapsulated the emirate's cultural project launched under the directive and vision of His Highness Sheikh Dr Sultan bin Mohammed AlQasimi, Member of the Supreme Council and Ruler of Sharjah.

Sharjah’s Guest of Honour Programme included over 200 individuals representing 23 cultural, heritage and academic institutions in the emirate presenting their most prominent publications and initiatives in the fields of literature, translation, art, libraries and heritage, to bring His Highness’s message and vision to the Mexican bookfair, under the supervision of the Sharjah Book Authority.

Commenting on the conclusion of the emirate's participation at FIL 2022, Sheikh Fahim Al Qasimi — Chairman of the Department of Government Relations (DGR) in Sharjah, and head of the Sharjah delegation — called on Emirati and Arab cultural institutions to follow the path of the emirate in building bridges with cities around the world. He said: "During Sharjah's activities at the bookfair, we felt the Mexican's eagerness to learn more concerning our Arab culture, and build bridges with our nation. It falls on our shoulders as institutions and individuals to follow in the footsteps of His Highness Sheikh Dr Sultan bin Mohammed AlQasimi, Member of the Supreme Council and Ruler of Sharjah, and present the noble and authentic values of our Arab identity and civilisation to the world."

Sheikh Fahim explained that nations and civilisations value and celebrate their counterparts especially after learning about the various aspects of their history and culture. He added that the UAE's participation and the Sharjah cultural project is a model that brings pride and honour to the nation. He added: "Mexico and other Latin American countries share many authentic values with Arabs, which makes it easier on us to build strong bridges that serve both cultures and their societies."

The Chairman noted that the strength of relations between countries is put to test by the challenges the world is going through, which was evident during the two years of the pandemic. He also stressed that deepening the relationships between UAE and Sharjah with other countries and cities worldwide, provides greater opportunities to achieve the aspirations of the country's developmental aspirations. He also pointed out that the efforts of Sharjah on a cultural level, in terms of expanding information bases, facilitating access to sources of knowledge, and investing in the academic sector, have a direct positive impact on the country's vital sectors, noting that the fruits of these efforts may not always seem apparent in the short term but rather in the size of its impact over time, which would be evident in the sustainability of communication and knowledge exchange throughout the years. 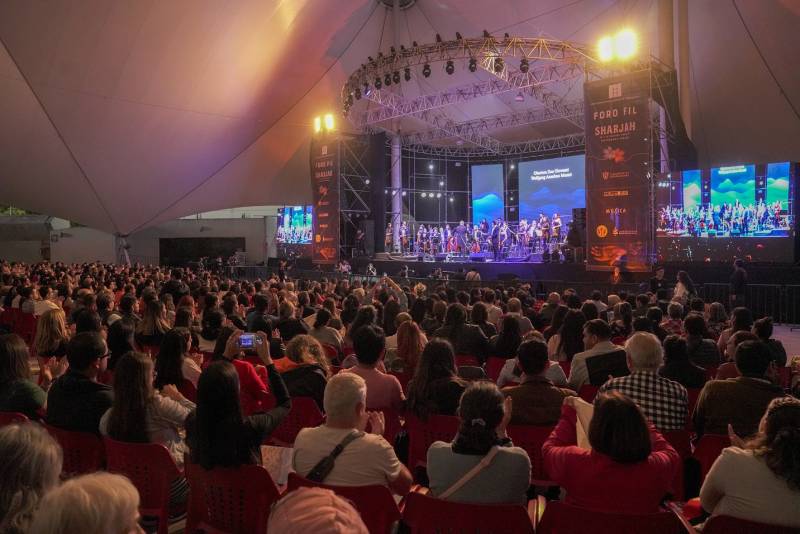 For his part, H.E. Ahmed bin Rakkad Al Ameri, Chairman of Sharjah Book Authority, noted: "During the nine days of FIL 2022, we saw the vision of His Highness Sheikh Dr Sultan bin Mohammed AlQasimi, Member of the Supreme Council and Ruler of Sharjah, which looks at literature, art and knowledge being an open space for the citizens and civilisations of the world to connect and discover how close and similar they are with each other, this outlook was manifested in Sharjah's pavilion this year. Although there are continents and oceans between our emirate and Mexico, we discovered what unites us in terms of values, history and culture, and most importantly our language and vocabulary, which were learnt and used frequently by the Spanish-speaking visitors of the book fair."

He added: "Through Sharjah's participation in the book fair, we wanted to showcase the rich Emirati and Arab culture to Mexico. So we were adamant to present our publishing scene, heritage, libraries and antiquities, as well as other elements from the cultural domain. We also shined a light on Sharjah's initiatives and projects to explore partnership opportunities with our Mexican counterparts. Today, we are proud of what the Emirati culture is accomplishing in one of the most prominent book fairs in the world. We had the UAE flag adorning the book fair's walls and our authors and intellectuals were received well by Mexican universities and schools. Every event we organised through this book fair was a manifestation of the importance of cultural exchange and its impact on building connections. We congratulate His Highness the Ruler of Sharjah for this global celebration and this cultural project that showcases our emirate, and congratulations to the UAE for this global presence in Latin America through this celebration of its history and present."

In her speech during the closing ceremony, Khoula Al Mujaini said: "During our daily activities at the book fair, we felt the strength of the bonds that unite our cities increasing. We have achieved a great deal in facilitating bridges between the Emirati and Mexican peoples, through the exchange of experiences, expertise and creative outlooks about the publishing industry, our belief in the power of the book, and our shared passion for the written word." 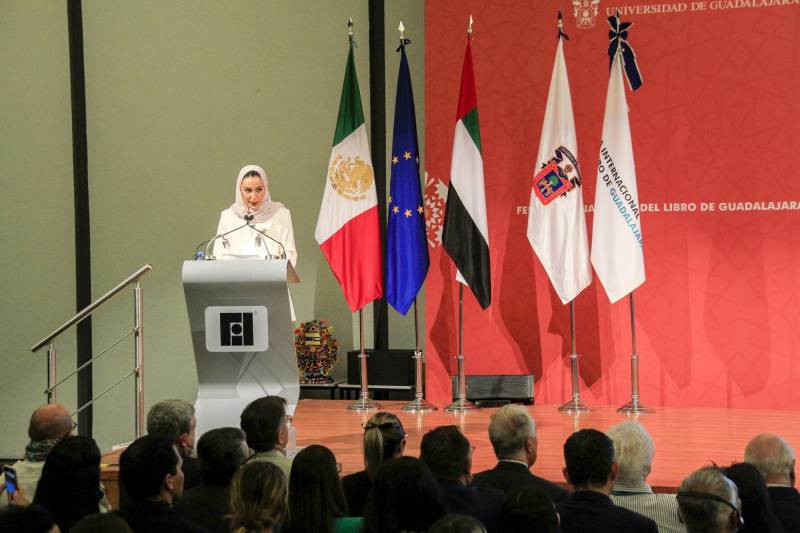 She added, "It was a great honour to present our literary and cultural personalities — including thought leaders, members of the publishing industry as well as artists and musicians — to the cultural audience in Guadalajara. The Sharjah Guest of Honour Programme brought together 24 of our top writers and creators, who participated in 25 sessions."

In addition to the cultural program, Sharjah organised 15 heritage shows in its pavilion and 5 shows on the main book fair stage, as well as organising a series of tours for Emirati writers and creatives to Mexican schools and art exhibitions in Guadalajara.