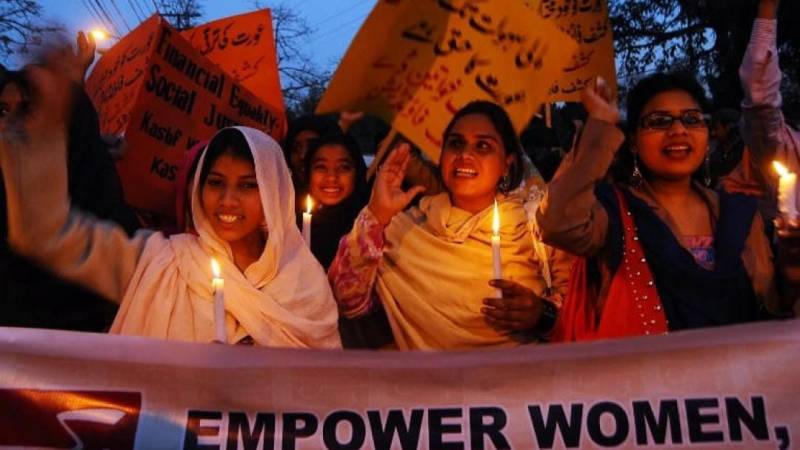 On March 10, 1944, the founder of Pakistan Quaid-e-Azam Muhammad Ali Jinnah, during the Muslim League meeting at Muslim University of Aligarh, spoke beautiful words about the significance of women in any nation’s success.

He said: “Another very important matter which I want to impress upon you, is that no nation can rise to the height of glory unless women are side by side with you. We are victims of evil customs. It is a crime against humanity to shut up women within the four walls of houses as prisoners. Let us try to raise the status of women according to Islamic ideals and standards.”

Without a doubt, these words from Quaid are comprehensive enough to recognize the amazing role women had played, and are still playing, in various societies’ success.

From generation to generation, the role of women has been positively transforming, and especially in the contemporary world, they are playing an active part in areas like politics, health sector, businesses, aviation sector, law, media industry etc.

To reveal these amazing services of women, every year, 8th March is celebrated to honor the success stories of women that they have achieved over the course of time.

After women gained suffrage in Soviet Russia in 1917, 8th March became a national holiday there. The day was then predominantly celebrated by the socialist movement and communist countries until it was adopted in 1975 by the United Nations.

When it comes to Pakistan, questions have always been raised as to what concrete steps are taken towards women rights and women empowerment. Well in different eras, steps are taken in this regard, but somehow, these steps lacked sustainability and therefore, it did not prove impactful.

However, leaving aside one's political affiliations, we must applaud the current Government of the Punjab, who in superb manner have taken significant steps for women rights and women empowerment.

A brilliant example of their superb vision is the Punjab Fair Representation Act 2014, which is there to assure at least 33% induction of women on Decision Making Positions in the government institutions.

What is more remarkable is that they have not simply persisted with this act, as they have marked out three major areas: education sector, social sector, and strategic reforms, under which different tangible initiatives are taken to ensure women a quality life.

For instance, with regard to education, 500000 female students are getting a monthly stipend of Rupees 1000 under Zeevar-e-Taleem program. Then, 6.5 billion Punjab Education Endowment Fund (PEEF) have been disbursed to 130,028 female students.

In the case of the social sector, the establishment of 16 family court complexes, induction of 3,663 women councilors for the capacity building at Divisions Level and establishment of 202 ladies specific Career Counseling Centers, are some notable steps of the present Punjab government.

Also, 427 ambulances have been provided under “Mahfooz Maan Ambulance Service” for expecting women living in the far-flung areas of Punjab, and establishment of 102 Day-Care centers to support working women in Punjab, deserve huge appreciation.

More than 18 billion Rupees have been distributed as Interest-Free Loans to 836,200 women under “Khadim-e-Punjab Self Employment Scheme,” and disbursement of around 200,000 Cattles among needy women, is something that is exemplary.

Coming to strategic reforms, the Punjab Assembly in February 2016, has passed Punjab Protection of Women Against Violence Act, which is considered a milestone as far as women rights are concerned.

Then, South Asia’s first Violence Against Women Center (VAWC) is inaugurated in Multan in March, 2017, under which 1545 cases related to domestic violence, harassment, rape etc. are being handled since its inception.

Moreover, the Chief Minister’s Strategic Reforms Unit (SRU) has recently launched its much-awaited programme by the name of “Women on Wheels: Motorbike Subsidy Scheme,” in collaboration with the transport department and Bank of Punjab, that is aimed at providing more than 3,000 customised motorcycles at subsidised rates through a 100 percent transparent balloting process.

The respect and rights of women are something without which the beauty of human relations are considered incomplete.

What Punjab government has achieved so far, it is high time that the other provinces must realize the same will and urge, because it is then Pakistan will ultimately become a nation where women will achieve the status as prescribed especially by our religion Islam, and what our founding father wanted as well.