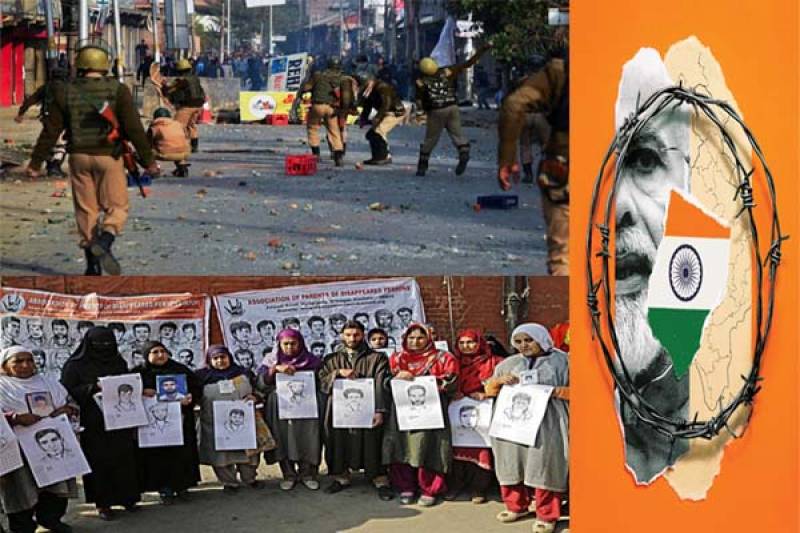 ISLAMABAD - Clock is ticking for the youth of Indian Occupied Jammu and Kashmir (IOJK) as extra-judicial killings and fake encounters by security forces become a norm in the valley for those who raise voice against brutalities.

The entire valley has turned into a prison, “the largest human jail on earth”, with unprecedented restrictions that continue despite the ongoing COVID-19 pandemic.

The new generation of Kashmiris, who have seen their loved ones got martyred in fake encounters and phony cordon-and-search operations, have joined the path of resistance as their right to self-determination.

The recent killing of a Kashmiri youth Riyaz Naikoo by the Indian security forces has refreshed the memories of Burhan Wani, who was martyred in 2016 being guilty of the same “crime” of demanding rights for his people, which have been also guaranteed by the top international platform, i.e. United Nations Security Council.

The Indian troops in an operation on late Tuesday killed Riyaz Naikoo, 35, along with three other Kashmiri youth, thus continuing with the attempts of crushing every voice that called for freedom.

Naikoo, the son of a farmer and a graduate from Government Degree College, taught mathematics at a private school before his life transformed into ‘resistance against inhumane violations’.

As per reports, Naikoo would often try to reach out to the Kashmiri people through audio and video messages on social media where he used to condemn India’s abrogation of Article 370.

The people of IOJK have been suffering under an inhuman lockdown and military siege for over nine months, following India’s illegal and unilateral actions of revoking the special status of Kashmir on August 5, 2019.

Pakistan strongly condemned the ongoing state-terrorism and extrajudicial killings of innocent Kashmiris in the so-called “cordon-and-search” operations in the IOJK.

Foreign Office Spokesperson Aisha Farooqui, at a briefing, said despite the surge in COVID-19 cases in the IOJK, Indian occupation forces continued their relentless campaign of oppression and brutalization of the Kashmiri people.

“Innocent Kashmiris are being martyred in fake encounters and phony cordon-and-search operations. In an inhuman practice, even the mortal remains of those martyred are not being handed over to the families,” she said.

Thousands of Kashmiri men, women, and children are taking to the streets to protest against Indian brutalities and to let the world community know that they reject illegal Indian occupation.

“The Indian occupation forces have again completely shut down the Internet in the IOJK after the life of another local Kashmiri resistance fighter was taken in a so-called encounter,” Farooqui stressed in response to the killing of Riyaz Naikoo.

Pakistan has been persistently highlighting that India must realize that it cannot break the will of the Kashmiri people and suppress their indigenous resistance movement through the use of force.

“The intensified resistance in IOJK is a direct consequence of Indian campaign of oppression and brutalization of Kashmiris,” a Foreign Office statement said.

The FO also categorically rejected the baseless Indian allegations of “infiltration”, saying it was “designed to divert attention from India’s grave human rights violations in IOJK and to create a pretext for “false flag” operation.”

Pakistan also called upon the international community to urge India to refrain from any ill-considered and irresponsible move, which could have serious implications for peace and security in the region.

“We also urge the world community to work for ensuring the peaceful resolution of the Jammu and Kashmir dispute in accordance with the United Nations Security Council resolutions and the wishes of the Kashmiri people,” the FO said.

India has trampled every single right of the Kashmiri people through its occupation forces acting with complete impunity under draconian laws such as the Armed Forces Special Powers Act (AFSPA), Public Safety Act (PSA), and Unlawful Activities Prevention Act (UAPA).

The foreign minister wrote several letters to the United Nations Secretary-General, reminding him to play a role in resolving the dispute of Kashmir after Prime Minister Imran Khan from time to time stressed that the issue could trigger a nuclear war between the two neighbors.

The recent incidents in the IOJK are reflective of the inescapable reality that India’s brutal campaign of violence and repression is meeting its logical consequences.

“Attributing this indigenous Kashmiri resistance to any alleged “infiltration” is a travesty. India’s typical allegations of “infiltration” ring hollow also because all these incidents have taken place deep inside the valley, several miles behind Indian military’s extensive Infiltration grid, comprising several layers of security,” the Foreign Office said.

It said India could not mislead the international community with its unfounded allegations and aggressive actions on the ground.

“Indian insinuations against Pakistan are patently designed to divert international as well as domestic attention from India’s grave human rights violations in IOJK, the treatment of Indian minorities, and mismanagement by the BJP (Bharatiya Janata Party) government of COVID-19 related challenges,” the FO statement added.

Pakistan has once again called upon the international community to take cognizance of the threat to peace and stability in South Asia posed by India’s irresponsible rhetoric and belligerent posture.

It is now time for the world to act and restrain India before the reckless policies of this ideologically-driven RSS-BJP dispensation cause grievous harm to regional peace and security.