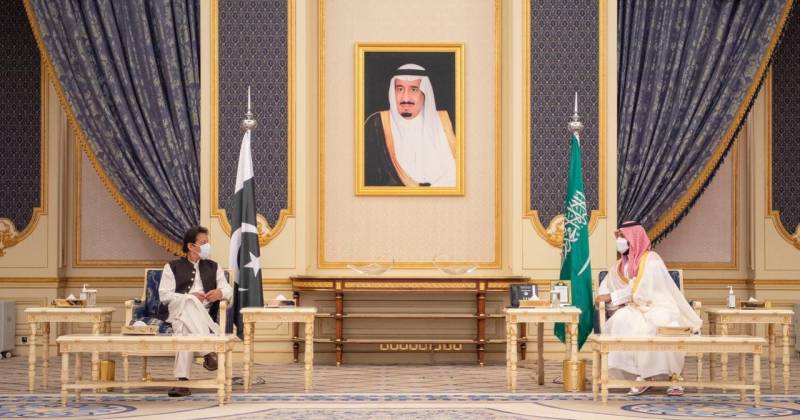 JEDDAH – Pakistan and Saudi Arabia signed agreements and memoranda of understanding on Saturday to boost bilateral cooperation in various fields.

The documents were signed during the visit of Prime Minister Imran Khan who arrived in Saudi Arabia on Friday evening on a three-day official visit heading a high-level delegation.

Imran Khan was received by Saudi Crown Prince Mohammed bin Salman other officials at the Royal Court at Al Salam Palace in Jeddah. Both leaders held a round of talks to strengthen bilateral relations.

The two leaders then held a series of talks, during which they emphasised the depth of relations between the two countries and the importance of expanding bilateral cooperation and coordination in various fields.

They also agreed two memorandums of understanding around combating drug trafficking; as well as financing energy, infrastructure, transportation, water and communications projects. Both the countries also agreed to establish a higher coordination council.

During his trip Khan — who has visited six times, most recently in December 2019 — will focus on improving ties with Riyadh and the needs of the roughly 2.5 million Pakistanis working in Saudi Arabia.

According to the Saudi Press Agency (SPA), the leaders also “exchanged views and issues of concern to the two countries on the regional and international arenas, in a way that contributes to supporting and strengthening security and stability.”

“Khan praised the leadership role of King Salman in promoting Islamic unity, and “the positive role of the Kingdom in resolving the issues facing the Islamic nation and its endeavors for regional and international peace and security,” SPA said.

It added that officials from both countries signed two agreements addressing the treatment of criminals, and crime.

Prime Minister @ImranKhanPTI arrived at Royal Court, Al-Salam Palace, where delegation-level talks were held between the PM and the Crown Prince.

He will also interact with Pakistani Diaspora in Jeddah. The Prime Minister will perform Umrah in Makkah and pay his respects at the Roza-e-Rasool Sallallao Allaye Wasallam in Madina Munawwara.