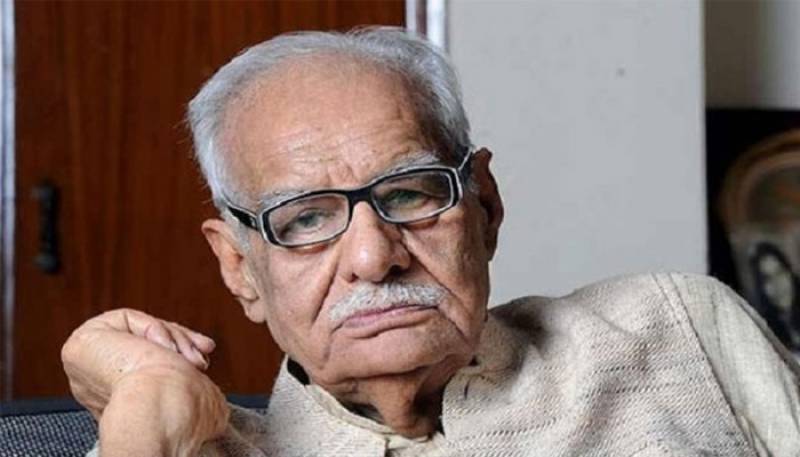 KARACHI - The mortal remains of veteran Indian journalist and activist Kuldip Nayar, who died on August 23, would be immersed in a Pakistani river during the running month.

The 95-year-old seasoned journalist, who wrote columns and op-eds for over 80 newspapers in 14 languages, including some Pakistani papers, took his last breath Escorts Hospital in New Delhi.

NEW DELHI - A seasoned journalist and human rights activist of India, Kuldeep Nayar, died at a hospital in Delhi, ...

His ashes will be immersed in Ravi river near Lahore, local media reported, adding that the remains of Nayar were brought to Pakistan by Pakistani peace activists who visited New Delhi on August 31 to attend a conference.

Besides a syndicated columnist, he also authored several books. He was also appointed as High Commissioner of India to the United Kingdom in 1990. In 1997, he was also nominated as a Member of Parliament in the Rajya Sabha.

Nayar wrote columns and op-eds for over 80 newspapers, including Deccan Herald (Bengaluru), The Daily Star, The Sunday Guardian, The News, The Statesman, The Express Tribune Pakistan, Dawn Pakistan and others.

Kuldip Nayar was born in Punjab’s Sialkot in British India (now Pakistan) on 14 August, 1923 to Gurbaksh Singh and Pooran Devi.

He completed a BA from Forman Christian College in Lahore and LLB from the Law College Lahore.

He started his career as a professional journalist from the Urdu press and later he became the editor of The Statesman in New Delhi.

He was known as an editor who refused to bend during the Emergency imposed under former Prime Minister Indira Gandhi's tenure.

Every year since 2000, Nayar has been leading peace activists to light candles on the Independence days of Pakistan and India (14/15 August) at the Attari-Wagah India-Pakistan border near Amritsar.

He has been working to free Indian prisoners in Pakistan and Pakistani prisoners in India, who have completed their sentences but have not been set free.