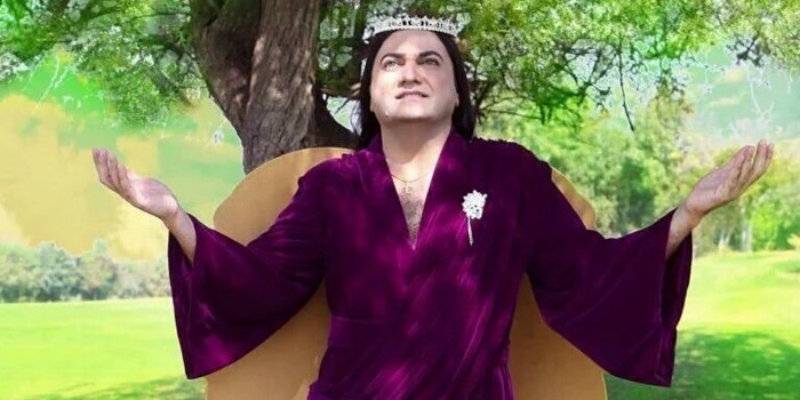 LAHORE (Staff Report) - Taher Shah, the one and only 'man with sensational eyes’, has reappeared as an ‘Angel’, soon after his ‘Eye to Eye’ debut.

The video which has gone viral globally, all over the internet has also become one of the top trends on Twitter.

Try not to laugh too hard on the first one. There are many more:

Suicide time!!! The little child will probably be scarred for life once he grows up and sees this!#TaherShah pic.twitter.com/GEh7PeCrQo

Finally figured out what kind of hoors suicide bombers would get? #TaherShah !!!!

#TaherShah is the only reason why music listening was declared Haram ??? ? pic.twitter.com/ysRnVnme6A

The only person who is most happy after #TaherShah song is this one ?? pic.twitter.com/xkuShisg0t

When Aunty kiss your cheeks and touch your chin. pic.twitter.com/GkY88xELvl

There was also a 'lovely' reaction from India:.

Condition of Baba Ramdev after watching video of #TaherShah . pic.twitter.com/y0X3FTF6bn

That moment when you can't figure out if the person holding you is male or female...#TaherShah pic.twitter.com/c3FojYvucN

Pakistan doesn't need nuclear weapons they can just drop this purple bomb on us #TaherShah pic.twitter.com/uSo2LfDF7s

When you see eye to eye with an Angel and discover you have contracted conjunctivitis #TaherShah #LastOneForTheDay pic.twitter.com/cSfnvq3mAo

The tremors were felt almost everywhere.

Taher Shah is what happens when people repeatedly tell someone "you can be whatever you want to be".

However, we could only find a single guy “thinking positive” after watching the video.

I honestly see many positives in #TaherShah's Angel, many life lessons ?