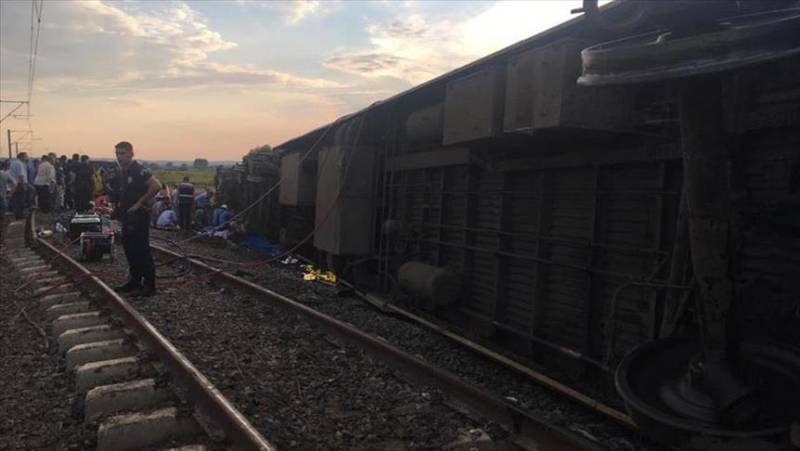 ISTANBUL - At least 24 people were killed and dozens of others injured after a passenger train derailed in northwestern Tekirdag province of Turkey on Sunday due to ground erosion after heavy rains.

The train, carrying 362 passengers and six train staff, was traveling from Edirne province to Istanbul when five of its carriages came off the tracks near Sarilar village, leaving nearly two dozens dead and over 100 injured, Turkish media reported.

Following the fatal accident, around 100 ambulances reached the scene to rescue the passenger, while military helicopters were also deputed to airlift the wounded passengers.

The Ministry of Transport, Maritime Affairs and Communications said in a statement the accident happened after the railway track slipped down from its original spot due to heavy downpour.

Meanwhile, President Recep Tayyip Erdogan was informed about the mishap by Interior Minister Suleyman Soylu and Minister of Transport, Maritime Affairs and Communications Ahmet Arslan over the phone, a presidential source said.

In a statement, Erdogan said the train derailment is being investigated thoroughly. He also extended his condolence to the families of persons who lost their lives in the accident.

In a Twitter post, Ibrahim Kalin, the presidential aide, said: "All the relevant units were mobilized for evacuation."