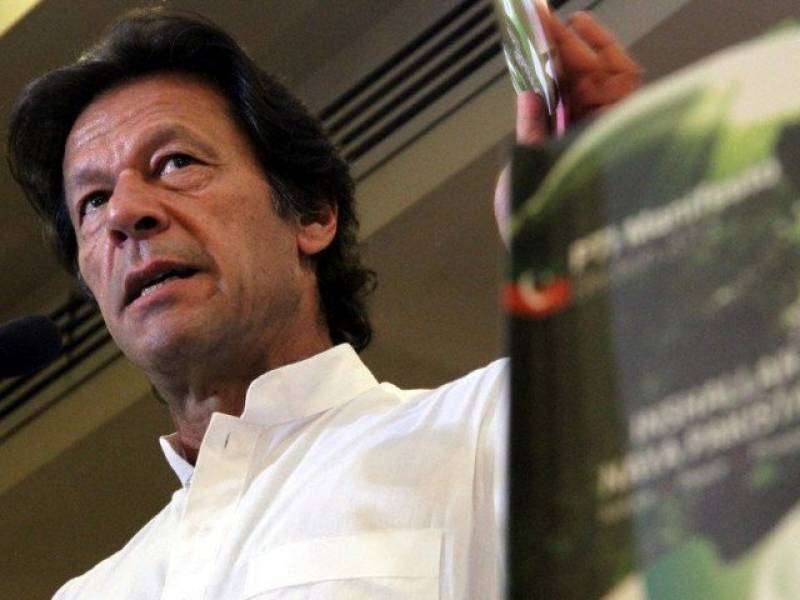 ISLAMABAD - Chairman Pakistan Tehreek-e-Insaf (PTI) Imran Khan has unveiled his party manifesto on Monday with a resolve to make Pakistan better after assuming power in the next general elections.

Addressing a ceremony in the federal capital city, the PTI supremo said that before revealing the manifesto he wanted to stress that whoever forms the government after July 25 will have to face biggest economic challenge ever.

"The reason is obviously the debts, devaluation of rupee and failed policies, making poor the poorer," he clarified.

Stressing on PTI's 'mission' to make Pakistan an Islamic welfare state, Imran said that his party will create a state in line with the principles that made the foundation of Medina — humanity and justice.

He admitted that the manifesto was no easy-solution adding that there were no easy solutions to Pakistan's problems as massive changes are needed to make the country brighter.

The PTI chief further observed that the developed societies have a governance system that is based on justice and accountability.

"That is what we are trying to replicate with this manifesto today," he said.

He lamented that the capability of bureaucracy to deliver effectively has diminished over time and the institutions have been ruined over time.

"The first challenge is unemployment and how to create jobs. We will ensure farmers' rights are not subjugated," he vowed with full confidence.

Khan shared that if given a chance to form the government, PTI will offer business incentives to create employment that would lead to prosperity.

"Our challenge is to create one crore jobs and five million homes in our five years term," Imran said.

The Pakistan People’s Party (PPP) and the Pakistan Muslim League-Nawaz have already launched their manifestos ahead of the general elections to be held on July 25th.

The PTI has launched its election campaign, with Khan holding rallies in different cities since last Sunday. He launched his campaign from his hometown Mianwali where thousands of people turned up.

Earlier this week, the party announced its Digital Policy which focuses on creating job opportunities, eliminating corruption through e-governance and boosting country’s IT exports.

In a video message, Imran said his government would bring Pakistan’s IT exports on par with India which earns billions of rupees through software exports.